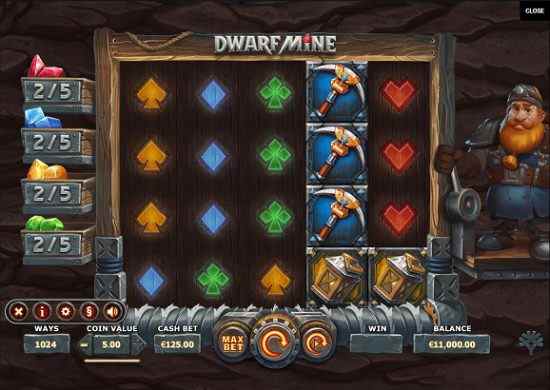 Who doesn’t agree that it’s always a great time when Yggdrasil proceeds with launching a new slot game? This developer has just grown and grown over its years in action, which has led it to become one of the best in the world today. So, it’s quite understandable that any new launch from the developer is bound to catch the attention of avid slot gamers.

This latest release goes by the name of Dwarf Mine, taking you deep underground to go digging for treasure. And it seems as though these are mines that have a plentiful supply of gold, gems and other treasures for you to unearth.

And in true Yggdrasil fashion, this game captures your imagination from the very start. Things begin with an introductory video depicting a miner who’s about to get to work in the pit with his pick axe slung over his shoulder and flashlight on his helmet. He’s definitely ready to find himself plenty of treasure down there. The great thing is, that as a new player, you’ll also be granted eight bonus crystals, which will fill up two of each of the five crystal slots on the left-hand side of the reels. More on these later.

As with all games from this developer, the graphics are the first thing that you’ll notice. Then again, why wouldn’t you when they’re so stunning? The game itself takes place on a layout of five reels and four rows, and this of course features some impressive symbols. The lower-paying additions are in the form of playing card suits, while the higher-paying ones are present in the shape of mining equipment. There’s a pick axe, a helmet, a shovel and a lantern. You’ll also get to see super high paying symbols, which are in the shape of four different gemstones. Plus, with 1,024 ways to win, we couldn’t ask for anything more from Yggdrasil.

Find the Treasure and Dig It Out

Before you can get to the game’s treasures, you’ll need to decide on a bet. In Dwarf Mine, you can select a coin value between €0.004 and €5, allowing you to place a maximum overall wager of €125 per spin. You can also make use of the game’s “Max Bet” button to reach this level instantly, if you so wish.

Then, as you form wins, you’ll receive pay-outs for the different combinations across the reels. Yet, it’s not until the special features become active, that this Yggdrasil slot gets even better. The first of its inbuilt features is the bonus icon. This is present in the shape of the drilling machine and whenever one of these lands, it will expand the reels by a single row. With this in effect, the reels can expand by up to three rows. Then, when you land three bonus symbols and have expanded the reels three times over, you’ll be given 10 free spins to play through! These will take place on the expanded seven-row setup, giving you greater opportunities to form wins.

As mentioned earlier, Dwarf Mine also allows you to collect crystals as you go mining. These only appear on the three expanded reels during base gameplay. If you get five of each crystal, then you’ll be granted five Collection Free Spins. This round features Super High Paying symbols on its reels, and again, it takes place on the expanded reel set.

It’s clear that Yggdrasil are always innovating, with Dwarf Mine going further to prove that than ever before. Overall, it’s a compelling game with intriguing inbuilt features that will provide entertainment for hours on end.