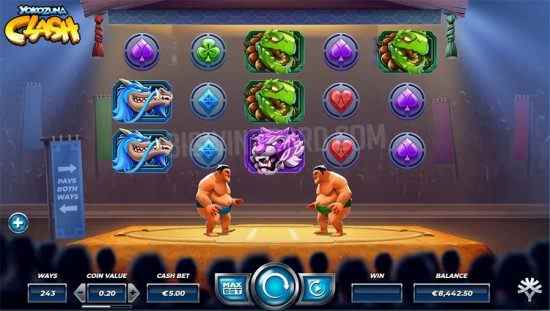 Yggdrasil Gaming, the pioneer iGaming supplier, has launched a wonderful title that shook market from the ground. By releasing the Yokozuna Clash, this giant provider has made its mark in the industry, once again. This competitive game is tailor-made for those who seek a true challenge!

Let’s join a real contest in a dohyo in Tokyo! During this action, we will witness the fight of sumo wrestlers to get enricher prize. On the 22nd of August, Yggdrasil Gaming has released Yokozuna Clash, which literally invites us to this event. However, we must remember that being a true champion requires discipline. As a perfect example of Yggdrasil Gaming’s portfolio, this game is developed with BOOST, which is an in-game promotional tool. As a result, the punters can multiply both their earnings and joy.

In the first place, the game takes place in the Base Game, in which two wrestlers stand on their corners. While one brings multipliers randomly, the other one brings random wilds. When they come together, they make a combo that gives enormous winnings. In case the players can get two scatter symbols, they can get a remarkable grand reward. But first, they must fight against two gigantic and relentless sumo wrestlers to get there. As we all know, victory is the ones who can give the price.

This title is a five-reel video slot with three-rows. What makes the game so attractive is offering up to 243 paylines. Moreover, its 96.3% return to the player rate makes this game pretty tempting. Nonetheless, Yggdrasil Gaming did not forget to make this game as reachable as possible. Therefore, it created this amusing title with an interface that makes it playable on every kind of smart device and browser. Plus, developing this game as available in more than 20 languages makes it a worldwide star.

What does Yggdrasil Gaming think about this release?

After making this debut, the company immediately made a press release. Natalya Ovchinikova, who is the Product Owner Slots of Yggdrasil, said that while creating this game, they curated the excitement of the action in the video games and their innovative vision. Thus, they received a highly-satisfactory outcome.

She also said that Yokozuna Clash comes with several features in-store, plus a round of free spins. Due to being a responsive game, the wrestlers reflect the actions on the spins accordingly. Consequently, they add more wilds or multipliers. Moreover, in case the contestants defat the Yokozuna, they win the tournament and make their wins double.

What is Yggdrasil Gaming known for?

For those who are familiar with the iGaming world, Yggdrasil Gaming is like a friend that they run into each other for several occasions. With its top-quality contents with exciting details, Yggdrasil Gaming is one of the most famous vendors of the industry. Throughout the years, regarding its passionate commitment to online casino gaming, the company is highly popular.

At the moment, the vendor’s name stands for a rich portfolio that contains lottos, kenos, video slots, and lotteries. All of its collection is perfectly designed and produced by the provider. Hence, it obtained a priceless reputation.