Renowned Maltese iGaming software developer Pragmatic Play is back at it yet again barely a week after launching its last video slot.

This time around the creators have upped their game, and the latest title is proof enough. The 5-reel 10-payline video slot is called Cowboys Gold and is designed around the American Wild West. In its official press release, Pragmatic Play released quite a few details of the title which aims to provide the veteran gamblers with bank prizes worth up to 6,065 times their highest stake. The studio went on to confirm that the title is medium volatile and challenges the players to find a band of outlaws along with an elusive renegade while staying vigilant for sheriff-themed Wilds.

Landing at least three skull-faced scatter symbols trigger the game’s free bonus round while the outlaw symbol features a multiplier that is triggered by landing one of these symbols on the fifth reel. Collecting the renegade symbol also triggers the Money Collect bonus, which rewards players with a potentially-lucrative bonus attached to the cowboy symbols nearby.

Expect More in the Coming Months

Pragmatic Play’s vice-president and spokesperson for the event, Lena Yasir said Cowboys Gold cements the studio’s commitment to offering iGaming operators an assortment of the best online casino entertainment. Pragmatic Play is betting big on the success of Megaways, and this is evident from the numerous titles using the mechanism. Yasir also added:

“Cowboys Gold transports players to the Wild West in the quest for treasure, and renegade plays a major role in the plot. He’ll soon become the player’s best friend, increasing multipliers and free spins, amplifying the stakes beyond your wildest imagination. Pragmatic Play is dedicated to creating games that appeal to our diverse audience base. And we’re proud of our intense roadmap, and commitment to launching high-quality titles every week” 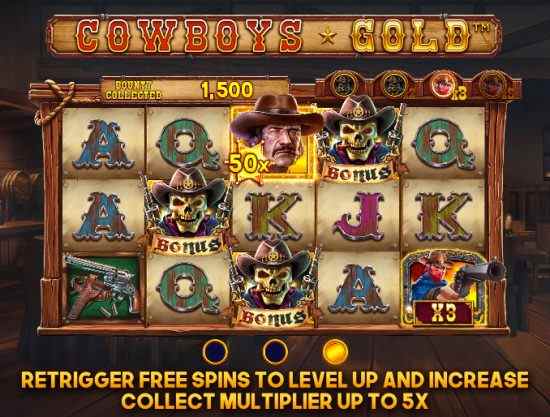 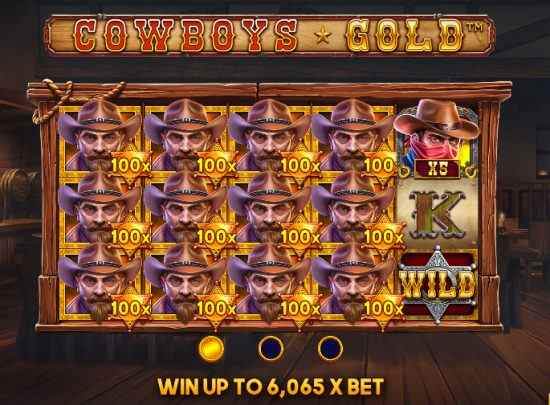 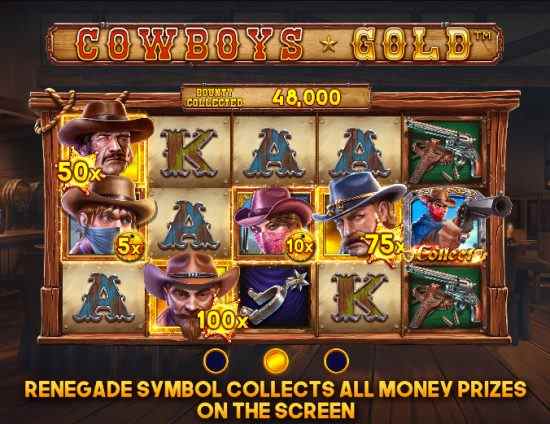 Cowboys Gold is a 5-reel 3-row video slot based on the Wild West. The game flaunts 10 paylines while buy-ins range between 0.10 and 100 per spin. The medium- to high-volatile title offers up to 96.5% RTP while the game has the potential to amplify your stake up to 6,065-times.

The base symbols include J, Q, K, and A while the mid-level symbols are the seven cowboys who all pay the same amount. The high-paying symbols are a spur, a revolver with a sleeve, a golden horseshoe, and a neatly filled whiskey glass with a bottle next to it. The character on the wanted poster is the same as the renegade symbol, while the Bonus symbol unlocks the bonus round.

Landing the Wild symbols helps create additional winning combinations, and these replace every in-game icon save for the bonus and the renegade. Landing multiple cowboys amplifies the total stake up to 100-times your bet. The Renegade symbol plays a crucial role here during the spin, and once it appears on reel 5, all cowboy symbols on the screen converge and the final sum is paid out.