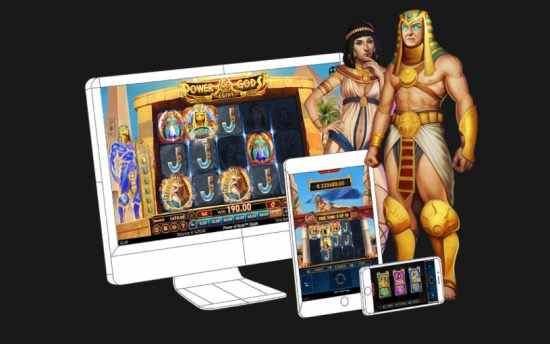 Popular iGaming software developer Wazdan recently launched its latest video slot based on Egyptian mythology. The second instalment in the Power of God series, Power of God: Egypt is a 5-reel 3-row video slot offering 243 winning combinations. The game offers custom volatility, which can be adjusted on the fly.

Power of God: Egypt by Wazdan takes players on a journey across the banks of the Nile, Africa’s longest river, to a land where Ancient Egyptian Gods rule over the reels. In-game symbols include Sobek, the crocodile god, Ra, the Sun-god, Isis, the goddess of magic and healing and also the wife of Osiris, God of the Underworld. The final premium symbol is Bastet, the cat-headed God.

The free spins feature unlocks most of the game’s bonuses. Power of God: Egypt offers four modes in total, each making lucrative contributions to the gameplay. Landing a scarab bonus symbol fills a meter on Ra’s hands by one. However, the symbol has to appear consecutively to trigger the bonus, as the meter resets when no scarabs are drawn.

Filling the meter with seven scarabs activates Ra’s spin bonus, rewarding players with seven free spins. A 7x multiplier randomly comes into play during Ra’s free spin round, amplifying combos along the way. Ra’s Wilds also convert to expanding Walking Wilds upon landing on the grid, where they expand to cover the respective reels and move one spot to the right per spin until eventually exiting the reels.

Landing three or more scatters anywhere on the screen during the base game triggers free spins. And depending on the number of Scatters landing on the reels, the players can choose from up to three Free Spin modes. Once triggered, the free spin mode continues till the end of the game. While Sobek awards 15 spins at the beginning, Isis offers 12, and Baset rewards 10.

Upon landing a winning combination, Sobek swings his staff, shifting the reels one position to the right while new symbols appear on the left reel. Landing winning symbols can trigger respins, and the cycle continues until no new symbols appear. Every time the players unlock respins, the progressive multiplier increases up to 7x. Ra’s Wilds are often replaced with Sobek’s Wilds during Free Spin mode and come with 2x multipliers.

Ra’s Wilds are often substituted by expanding Isis Wilds that last for the duration of the feature. It triggers when appearing on the grid and expands to cover the rest of the reel—Isis Free Spins land with 3x multipliers attached to them.

Triggering Bastet Free Spins activates an avalanche of wins where all winning symbols are removed from the screen and are replaced with new ones appearing from the skies. The feature is in place until no new winning combinations are formed. Every cascade increases the progressive multiplier by 1 and comes with no limits.