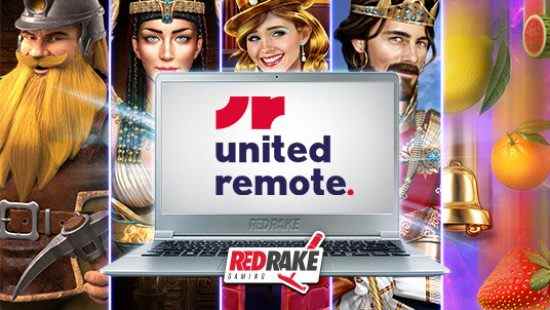 This will see as many as 40 Red Rake’s games integrated into United Remote’s platform, giving both companies another boost. Any future releases by Red Rake Gaming will immediately appear on United’s content platform, helping more players access the products.

Not only that, but the companies have also added the progressive tournament tool. Pooling big amounts of money together will whip up interest in the products, leading to better engagement and growing user base, the companies hope.

So far, United Remote’s content aggregator has added distinct titles, including Gustav Minebuster and Million7. There is also Secrets of the Temple, which invites you to join a rather more Indian Jones-style game.

While United continues to add content partners, the company has gone through some restructuring. Jeremy Fall recently stepped in as CEO, vowing to push United Remote into the future.

Red Rake foresees a strong 2020 ahead of it. Despite the global economic lockdown, the developer remains committed to targets. The strategy for 2020 is two-pronged, addressing both the B2B and B2C segment.

Red Rake has launched with CasinoSecret recently, an operator holding a license from the MGA. At the same time, Red Rake continues to deliver more fresh releases. One of the highlights of the gaming experience is the progressive tournament tool, leading to better overall results and prize purse.

Red Rake MG Nick Barr has commented on the new tie-up, talking about significant synergies between the companies. More importantly, the companies would be able to reinforce their presence in established markets – Spain and Malta, as well as others.

United’s Fall said that moving forward consumers will be able to access the full portfolio of Red Rake Gaming content. The companies are also looking beyond their traditional bastions in Europe, and they intend to focus on Latin America by releasing a number of Hispanic slots and pushing content strategy in the market.

Red Rake is a content supplier and iGaming developer with a growing foothold. The company has been in the process of diversifying its portfolio by striking important milestone partnerships with a number of companies, not least Royal Panda.

At the beginning of April, Red Rake entered a pivotal partnership with Royal Panda. As a result, Red will provide Royal Panda with the full portfolio of its products. Therefore, the provider will make its products available to Royal Panda’s impressive consumer list.

Red Rake also struck another partnership in April – this time with MrSlotty. Red has been on a mission to increase the number of active casinos it works with. The deal with United Remote only confirms this.

UR’s aggregator platform continues to be one of the most sought-after solutions on the market. Red Rake’s addition is a way to bolster the number of titles as well as its reputation.