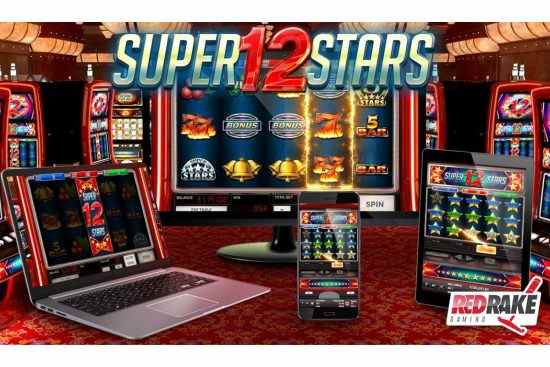 On May, 28th, the Spanish provider Red Rake Gaming has launched its latest slot monster Super 12 Stars. With this move, the provider expects to expand the number of its gamers.

Since 2011 Red Rake Gaming has been improving its name in regulated iGaming markets, such as the UK, Germany, Spain, Portugal, Italy, and Sweden. During this period, the company has provided more than 50 games, including BlackJacks, video bingos, roulettes, video slots, and video pokers, to various iGaming platforms.

After receiving a successful experience with Super 5, Super 7, and Super 10, the company decided to take one more big step and launch Super 12 Stars. By taking this step, Red Rake Gaming aims to draw the attention of the slot lovers on its new member and enlarge the company’s share in the market.

Super 12 Stars is an HTML5 5×3 reels video slot game. The players can also play this game via their smartphones, either in portrait or landscape mode. The game consists of 30 winning lines that come up with the best features of the previous games.

At the moment, the game is available in more than 20 languages, including Asian, Scandinavian, and European languages. Today, the game is about to be certified within the UK, Spain, Malta, Italy, and Sweden. Also, the players are able to deposit the money within more than 100 currencies. Moreover, the provider generously added a unique bonus “Lucky Stars”, which has three types of Jackpots and quick wins.

Red Rake Gaming seems dedicated to maintaining something new. That’s why in the press release, headquarters indicated that Super 12 Stars shines out from the previous games in different aspects. For instance, the games are available in 22 languages in order to reach more gamers around the world. Plus, it offers the players nine different bonuses to multiply the joy.

As the most important features of the game, Red Rake Gaming wants to serve plentiful bonus opportunities to the gamers. Apparently, the provider is eager to double players’ joy. Therefore, they developed these exclusive bonuses below.

With launching this new game, Red Rake Gaming will increase its brand value by gathering new gamblers together. Furthermore, we think to furnish the game with many bonuses, and enjoyable features are going to draw attention more than ever.