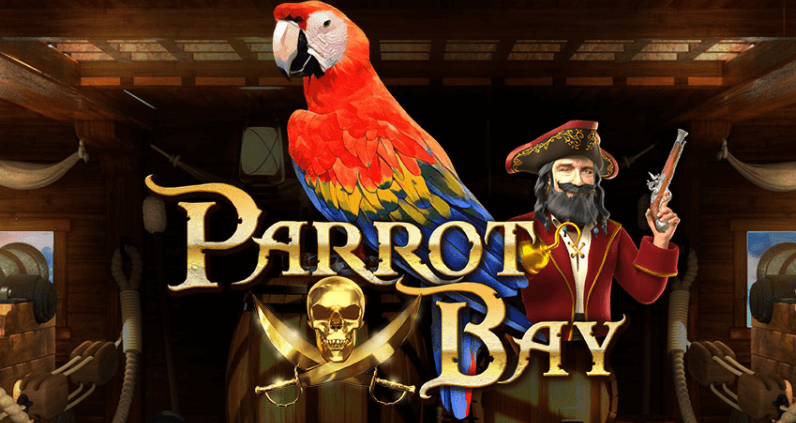 The gameplay takes the players on a wild ride alongside a feared pirate crew who’s out looking for the world’s most priceless treasures hidden in Parrot Bay. The free spins feature with multipliers and special symbols and an exciting cannon minigame are the highlights of Parrot Bay.

Accumulating the cannon symbols from every non-winning spin on the progress bar triggers the cannon minigame. Upon entering the round, the reels turn into cannons, commencing a battle that rewards players with each win. The minigame unlocks 6 shots and 15 squares.

The cannons fire at the squares one at a time revealing either a spyglass, anchor, or wheel symbol. And the players can achieve multiple wins by obtaining several symbols in-a-row. During the base game, each winning symbol disappears triggering a re-spin. The symbols on top drop down and fill the empty spaces with new icons.

The new symbols add to the winning combination, and the cycle continues till no new payout combinations are possible. The free spins feature is exciting as it includes multipliers and special symbols. Players must line up five or more re-spins to activate the free spins round, which results in ten free spins.

A special symbol is randomly selected at the start of the free spins bonus round. All wins, including this symbol, are multiplied by a fixed value. Players can get additional free spins and a new symbol with a multiplier simply by lining up four or more re-spins during the bonus round.

The Parrot Bay features ten symbol positions in each column. Players typically get fewer than the maximum number of symbols on each spin. Therefore, a million paylines aren’t guaranteed by any means. While forming new combinations, players can also trigger the Cascading Reels feature.

The designers incorporated the soundtracks and visual effects quite well into the package. The video slot promises action-packed entertainment where the players will feel like a part of the pirate squad out on a treasure hunt.

Parrot Bay launched on December 17 across all official Red Rake Gaming operators and partner networks. The game has so far proved to be quite popular at online casinos with players from around the world appreciating the final product.

Like every other popular title from Red Rake Gaming, the developers plan to induct Parrot Bay into its tournament portfolio, and the punters will be able to access the game in the near future.