Popular Maltese iGaming software provider Pragmatic Play is teaming up with Reel Kingdom Studio once again for their latest video slot. The new 5-reel 10-payline title is called Return of the Dead and promises a whole lot of innovation and entertainment.

According to Pragmatic Play’s official press release, Return of the Dead is a highly-motivated title that fits well into the company’s booming portfolio. The storyline invites aficionados to follow the journey of an aspiring traveller as he roams the deserts of Egypt in the quest of the big treasures.

Developers claim the game is highly volatile and comes with a whole list of high-paying icons that serve as Wilds and Scatters. This definitely stands true as the maximum win can rise up to a staggering 20.000 times the players’ stake. Furthermore, the company states that players are challenged to search for the game’s highest-paying symbols, including the male protagonist icon.

Pragmatic Play’s Chief Commercial Officer, Melissa Summerfield, in an official Press Release said the mobile-friendly Return of the Dead is the latest casino innovation in partnership with the Reel Kingdom. This is the second title in the company’s kitty, following the successful launch of Emerald King earlier this month.

“Return of the Dead sees Pragmatic Play team up with Kingdom Reels for another action-packed high volatile exploration video slot. As we continue to come up with a high number of highly-popular video slots per month, the importance of variety has never been greater. Working with Kingdom Reels allows us to target new demographics and the path has been extremely exciting for us to walk on.”

Return of the Dead is available on multiple devices, including the desktop, tablet, and smartphones. Buy-ins range between €0.10 and €250 per spin while hardcore gamers will appreciate the high volatility. The game has a 96.71% default hit frequency, which is among the highest in the “Book of” series to date. 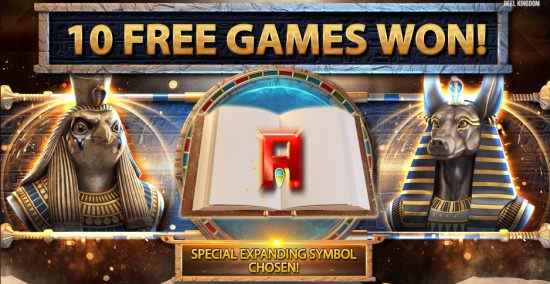 Although the title bears numerous similarities with the Book of Ra and Book of Dead video slots, there are minor nuances keeping things fresh for the veteran punters. The symbols include scarab, Pharaoh, Horus, and a smiling man while the base game offers between x75 and x500 the current stake as the prize.

As true for most titles in the category, the primary attraction is the free spin round while the book symbolizes both scatters and wilds. As a wild, the book replaces every other symbol to form a winning combination while the Wild is worth x500 for a line of five.

Landing the scatter 3, 4, or 5 times in a single round award between x2, x20, and x200 the total bet plus 10 free spins. Before a round begins, a special expanding symbol is randomly chosen. These expanding symbols appear at the end of free spins to amplify the wins, even when appearing on non-adjacent positions.

RETURN OF THE DEAD, PLAY HERE