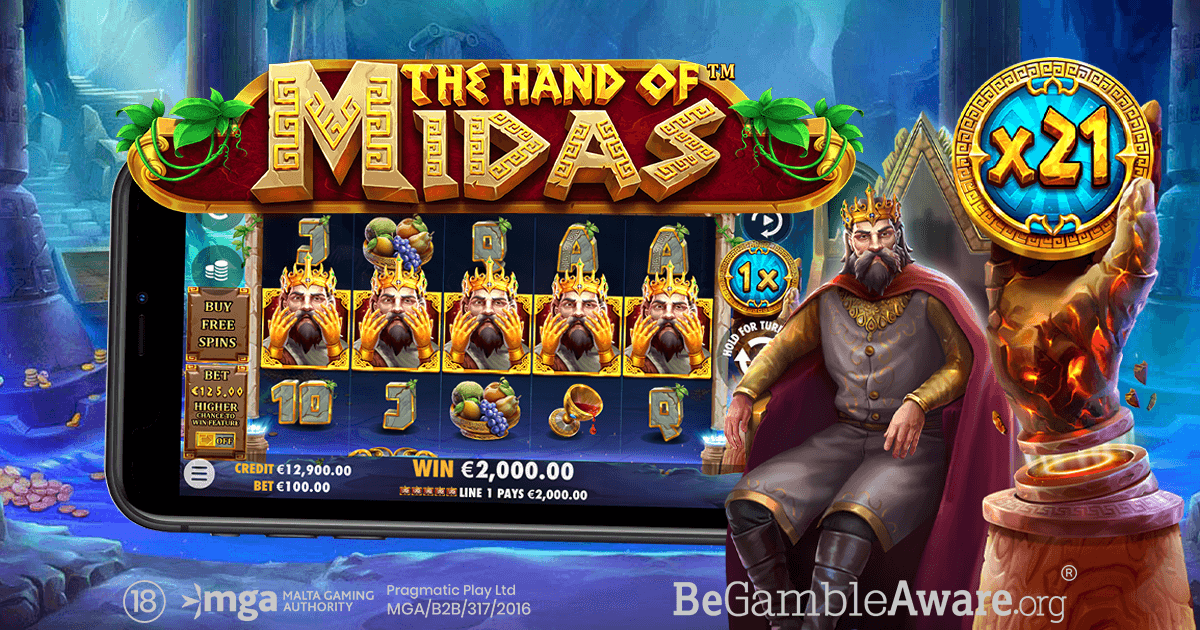 Reputed iGaming software developer Pragmatic Play just announced its latest video slot, The Hand of Midas, in the wake of launching its much-awaited Mega Roulette title. The 5-reel 3-row video slot with 20-paylines comes with a maximum potential of amplifying the stake by 5,000 times.

The design and gameplay are heavily-influenced by King Midas, a famed Greek mythological character who could turn anything he touched to gold. The backdrop consists of a mysterious ancient temple underwater with colossal pillars etched in gold. The game’s highlights include vivid graphics and equally enthralling soundtracks that are sure to grab the players’ attention.

The low-paying symbols include standard 10-A of cards while the high-paying symbols are a bowl of fruit, goblets, Midas’ daughter Marigold, Dionysus, and the Gold of Wine. The most-lucrative symbol is King Midas and can pay between x2 and x20 the existing stake. Landing three scatter symbols triggers the free spins bonus and getting a winning combination awards a random number of extra spins.

The Bonus Mode unlocks additional chances for huge spins as the Wilds turn sticky during the round. The players can also receive consolation spins as part of the king’s generosity.

“The Hands of Midas teleports players to the land of the greedy Greek monarch and helps relive the ruler of his wealth within the land. Our exclusive portfolio of video slots continues to expand every day as new titles like The Hands of Midas help create interesting options for the fans”.

The Hands of Midas is part of a slew of popular titles from Pragmatic Play. The list includes Eye of the Storm, Madame Destiny Megaways, Dragon Kingdom Eyes of Fire, and Congo Cash. Pragmatic Play is also gearing up for Mega Roulette, its latest live casino vertical. The single-zero roulette title is currently available across Latin America.

The roulette product goes live across Pragmatic Play’s entire partner network on February 24. Apart from being able to place “Mega Bets” players will also be treated to an entire range of multipliers and awards, capable of amplifying the bets by up to 500-times, leading to a serious winning potential.

The studio has also confirmed plans to launch Drops & Wins weekly tournament series starting on February 11, 2021 and ending November 17, 2021. The creators plan to give away a whopping €/£250,000 per month through Daily Prize Drops and Weekly Tournaments. The studio is furthermore gearing up for its next project in the pipelines titled Joker King.

The Hand of Midas: Bonus Features

The Hand of Midas is a high-volatile video slot with 96.54% RTP and a buy-in range between £/€0.20 and £/€100 per spin. Using the Ante Bet feature adds more scatters to the reels while doubling the chances of triggering new spins.

The Hand of Midas is so much more than a conventional slot in terms of rules. The Wilds plus Multipliers is a knockout combo. And while the base game isn’t as impressive, the x1, x2, or x3 random multipliers and wild symbols up the ante. Each mini slot awards up to 3 free spins while the total is carried to the bonus round and cannot be re-triggered by scatters.

When wilds hit during free spins, they add to the win multiplier in the base game, but with two crucial changes. First of all, the wilds become sticky, and secondly, the win multiplier does not reset between spins. While this might ring warning bells in a few, the free spin round comes with a minimum win guarantee.

Depending on the local regulations, players might be able to buy free spins in the base game. The three available options are 100x, 200x, and 300x, while the total bet triggers free spins with 3, 4, or 5 scatters.