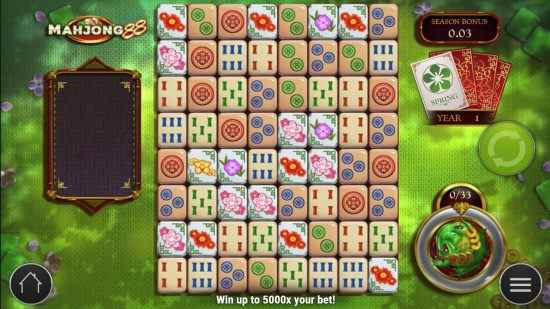 The Play’n Go brand is once again at the front and centre of the news, with the release of its Mahjong 88 online slot game. This is the first from the developer to features a supercharged 8×8 grid for you to play on, and it incorporates all of the fun of the classic tile game alongside the thrills of a slot.

So, how does this all work? Well, Play’n Go has decided to add a bit of a new twist to the game. Rather than having symbols cascade onto the grids as they normally would in an online slot, they basically all reveal themselves to you at once from the underneath of the grid itself! And the unique qualities of Mahjog88 don’t begin and end there, because the game is full of exciting twists and features.

Every time a new set of mah-jong symbols come into view on the grid, the layout will be evaluated. Symbols appearing in a cluster will then award you with a win as long as there are four or more of these. You can form wins of 12 or more clusters of symbols, rewarding you with the slot’s highest standard pay-out for such. Naturally, all of the symbols on the grid are relevant to the theme, so they appear as mah-jong tiles. The symbol of the purple flower mah-jong tile is the highest-paying standard addition to the game.

Playing a Game of Mahjong88 Will Convert You

If the basic layout and gameplay of this slot isn’t enough to convince you of its appeal, then perhaps some of its inbuilt features will do instead. Let’s take a look at the possible bets first though. By simply using the buttons at the bottom of the reels, you’re able to select between wagers of €0.10 and €100 per turn, while an autoplay buttons has also been included in the game for your use.

A Play’n Go slot wouldn’t feel right without including some bonus perks, though. Fortunately, Mahjong88 does have a selection of these to be entertained by. First of all, there’s the addition of concealed tiles, which will rotate to be revealed as the same symbol as the one it’s adjacent to. This helps with forming larger winning clusters.

Whenever you form a win in the base game, you’ll also fill up a meter, which can be seen on the right-hand side of the grid. This is the Fortune Frog meter, and after winning on 33 symbols, you’ll see a feature is chosen at random. Alternatively, after winning on 88 symbols, the Super Charge meter will ensure that all wins are multiplied by 5x.

While playing the game, you’ll also go through different seasons. This season will change randomly and when this does occur, a bonus will be given to you, which grows by 10% each time you pass through one. Each season also has its own set of wilds, coming with their own special additional perk. These perks include the ability to destroy adjacent symbols, the chance of falling randomly on the grid and the possibility for symbols to turn wild or be destroyed from the edges.