Popular iGaming software developer Play’n Go recently debuted its latest cascading grid video slot, Shimmering Woods. The highlights of the title include Dynamic Reels, Cascading Win, and Splitting Symbols. The 5-reel 3-row video slot takes players on an excursion through a mysterious forest while amplifying the stake by up to 25,000-times.

In-game symbols include 10-A standard card icons and four high-paying gem icons. A fifth gem serves as the Wild and can land anywhere on the reels. Its value is similar to the game’s highest paying diamond icon and can replace every other low-paying symbol on the grid. 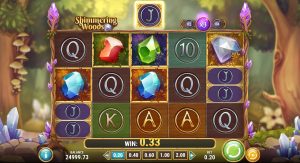 The exciting Splitting Symbols mechanism is a novelty and increases the number of pay lines. When triggered, it randomly selects one icon to split. This boosts the standard 243 pay lines to a massive 7,776 pay lines.

When combined with the progressive extra spins feature, players can achieve multiple splitting symbols and re-triggers throughout the rounds. This is a prime example of how innovative design can transform a well-known game design.

“When something strikes a chord with the players, they want more of it. That’s how things automatically become popular. But it’s not just about repacking old content in a new avatar”, Johan added. The CEO also stressed the importance of introducing “new gaming experiences within the threshold of existing content that players already love”.

“While it’s not important to reinvent the wheel every time, you need to keep things fresh for the players to want it”, Johan explained. Play’n GO is popular for instilling their own twist on industry staples. From introducing new mechanisms to flaunting new themes and everything in between, the developers use every trick in the book to keep the content fresh. Cascading grid slots are a prime example!

Play’n GO’s innovative interpretations of popular themes like ancient Norse or Greek mythology is what separates them from the rivals. This has been a common thread in their previous titles too. Games like Coils of Clash, Perfect Gems, and Frozen Gems all use a variation of the standard payline mechanism.

Shimmering Woods is a medium-to-low volatile video slot with 96.2% RTP, and the betting range is between £/€0.20 and £/€100 per spin. The cascading feature replaces the winning combination with new symbols, increasing your chances of amplifying the stake. The multipliers start at x1 and increase by 1 with every cascade. It resets at the beginning of every new spin. 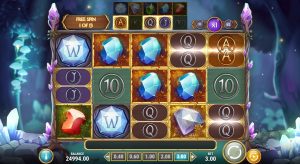 Landing three purple scatters on reels 1, 3, and 5 triggers the free spins bonus round. The rewards include

In conclusion, Shimmering Woods is definitely a mysterious game. The title is low to medium volatile allowing players to play a while. We are getting really excited, you as well?