Reputed Swedish iGaming software developer Play’n GO has come up with its latest video slot – Cat Wilde in the Eclipse of the Sun God. It might be a mouthful, but brings back the fictitious character based on Rich Wilde, a staple at Play’n GO.

The studio confirmed that it extended this colourful family last year with the invention of the adventurer’s daughter, Cat, and the subsequent launch of the Cat Wilde series. The titles include Cat Wilde and the Lost Chapter and Cat Wilde and the Doom of the Dead.

Play’n GO confirmed that Cat Wilde in the Eclipse of the Sun God is an ideal addition to its portfolio and carries the alluring charm of the Wilde series. The 5-reel 20-payline title has an incredible in-game potential for granting huge wins. Lets have a closer look at this new Wilde Series slot.

The mobile-friendly game takes players on an exciting journey through rural Mexico as they help our protagonist uncover the legend of the Eclipse and the Aztec Sun God. Martin Zettergren, Play’n GO’s Chief Product Officer, described Cat Wilde in the Eclipse of the Sun God as a cascading video slot, complete with a cascade multiplier that increases the value of wins up to 70-times the stake.

“The number of games vying for attention today is huge. This makes it difficult for makers to develop a title that stands out. But when players find a title that they can connect with, they keep returning as long as they have a great experience or find something new and exciting. The Wilde series is renowned for offering the perfect mix of novelty and excitement and has set the bar high for its successors”.

Cat Wilde in the Eclipse of the Sun God: Bonus Features

Play’n GO redefined the boundaries of cascading multipliers with a math model very similar to Gonzo’s Quest by NetEnt. The Sun God is the Wild symbol and replaces the non-paying icons. Landing five of these on the three middle reels during the base game triggers 100x the stake. The payout further benefits from the Cascading reels feature.

The winning symbols are replaced with new ones that drop down to take their place. The process continues as long as no new winning combinations appear on the reels. The multipliers begin at 1x when a win is triggered and increases to x2, x4, x6, and x10 for four consecutive cascades. 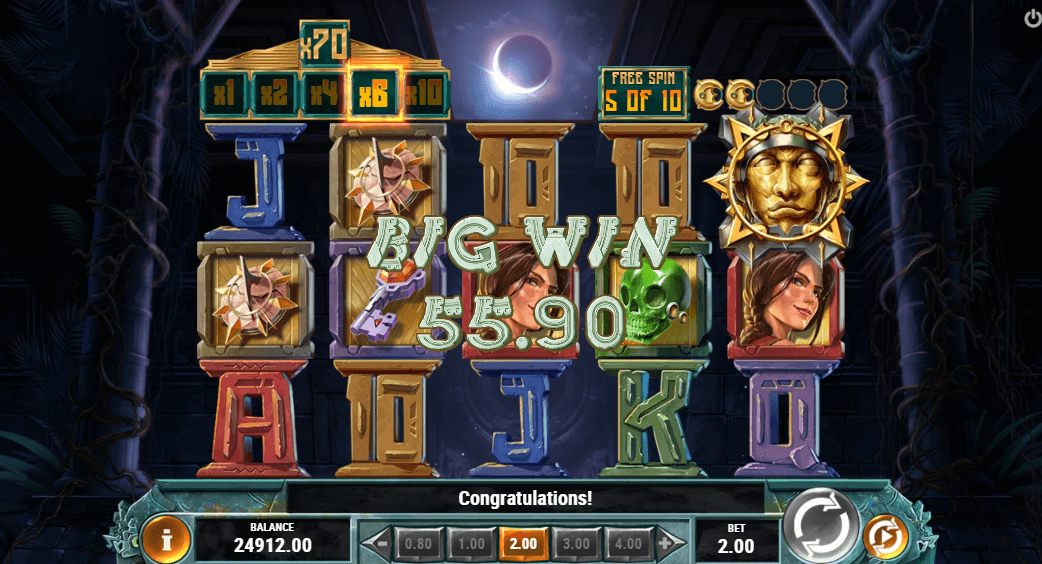 The bonus round is triggered when three Moon Goddess scatters appear on reels 1, 3, and 5 on the same spin. Players begin with 10 free spins, and the progressive win multiplier extends the range by x70. The Mood scatter doubles up as the Wild during the free spins round and is kept in a meter above the reels.

Collecting 5 scatters trigger an eclipse and awards five extra spins each time with a maximum of 30 free spins while the multiplier values are also upgraded. During the bonus round, the 70x multiplier stays in place while the Wilds can land across the reels.