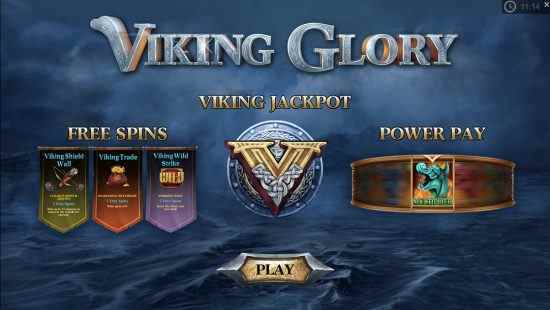 This week, Pariplay released its latest slot game Viking Glory. Although the provider is relatively not popular, it is estimated that this title will make its name count. The reason for that is Pariplay developed this game as the most bonus featured one. Hence, the company quite relies on this title more than any other one in its portfolio.

Probably we all know who Vikings are. They’re the mythological figures that had been sailing all around the northern seas. This time, Pariplay gave us a chance to join their destiny to find fortune. However, with its 8th-century atmosphere, the game brings the coolest and most thrilling adventure experience. If you are brave enough to discover the deepest seas in the world, all you have to do is making a few clicks. Afterwards, Pariplay will welcome aboard!

However, in case you are an iGaming fan, who adores responsive graphics, Viking Glory is your cup of tea. Pariplay developed this game to address those who want to have the best. Therefore, the provider added a thrilling soundtrack, which will make you enjoy sailing more than ever.

With its 95%+ RTP rate, this generous title has regulatory certificates from the UKGC, MGA, and the Isle of Man. Besides, regarding its exciting features, Viking Glory is also translated in more than 20 languages.

The most important thing that you will definitely love is this game is developed with dozens of bonuses. For instance, aside from usual free spin features, it has a Scatter Jackpot that contains five progressive jackpots. Last but not least, it has a fresh feature, Power Play.

Power Play is a feature that takes the gameplay of Viking Glory to one more step. When you activate this feature, the game will reward you with a special horizontal reel. Afterwards, you can either receive Power Pay Credits, Power Pay Multiplier, Power Pay Wild Reel, or Power Pay Respins. Regardless of which one you activate, the title promises a lot of rewards to boost your joy.

Additionally, Viking Glory contains other unique features that will make you experience Viking tradition at its best. In this sense, you can encounter the rounds of the Viking Shield Wall, Viking Trade, and Viking Wild Strike Free Spins as generous bonuses.

What Pariplay expects from this debut?

After launching this title, Commercial and Marketing Director of Pariplay, Richard Mintz, has made a brief statement. He pointed out that Viking Glory gives another exciting experience, especially due to the Power Play feature. Furthermore, he said that regarding its a number of special rounds and high-volatility, players would remember this game for a long time and play over and over again.

What does Pariplay do?

Despite the fact that Pariplay’s name is not that popular in today’s iGaming world, it is a strong provider that works in both online and land-based casino industry. However, this B2B software developer remarkably contributes to the online gaming world, particularly both in lottery and casino business.

The company has a simple vision, which is delivering entertainment within its contents as smooth as possible. In order to sustain that, it has a comprehensive working system. Hence, Pariplay has powerfull business relationships with its partners.

In terms of iGaming portfolio, the vendor does have not only enjoyable contents but also cutting-edge solutions. It provides platforms with user-friendly interfaces as well as top-notch titles. Nonetheless, in the sense of games, the company’s collection mostly consists of slot games. Additionally, it has a few table games, instant win titles, scratch cards, and of course, table games.

On the other hand, Pariplay’s branded games, like Battle Royale, and Pets Go Wild, are quite popular nowadays. Besides, its exclusive series created with the partnership of third-party providers, such as Ballywulff Exclusives, Skillzzgaming Exclusives, Pirates Gold Studios, and Juceey.