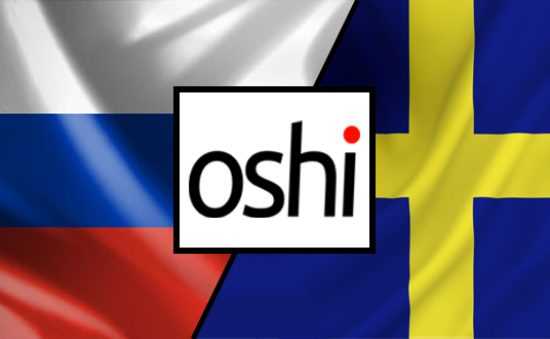 It’s essential for any casino operator to scope into as many territories as possible and to accomplish that, a site should really be multilingual. English may be reckoned as the international language for the gaming industry – amongst many others – but multi language versions of a site are vital for future growth.

That’s why Oshi has extended their range beyond the main English portal and as a result, they are now launching versions of the site in both Russian and Swedish. In addition, both Swedish Kronas and Canadian Dollars will be offered in the near future as currency options for banking purposes.

Oshi was launched in November 2015 to meet the specific needs of the Cryptocurrency community and while it was initially Bitcoin specific, the desire for access meant growing to accept FIAT funding. Bitcoin users remain a focus for this operator but there is an evident demand to widen that coverage.

Euro were the first to come on board early in 2016 shortly followed in October of the same year by Australian Dollars, Russian Rubles and US Dollars – although it’s important to note that the United States remains on the restricted list and residents are excluded from playing at Oshi. Those currency additions have made the operator more accessible all around the world and the further expansion on several key points will boost the accessibility even more.

In an age when many casino and sportsbook providers are focussing entirely on one region, it will undoubtedly be beneficial to both the operator and their partners to be more welcoming across the globe.

Oshi manager Marko Csokasi said: “Today, operators tend to create casinos to suit specific regions, whether that be in terms of branding or functionality,”. He also added: “While this is great, Oshi is a brand which caters for the vast majority of the world, therefore the internationalization of the site has been a key moment. While Oshi isn’t known for the flashy design, we thrive to make the core casino functionalities work better than anywhere else – players deserve this internationally.”

Oshi is all about giving choice to the customers and that begins with a great range of slots, table games and more from a wide list of software providers including SoftSwiss, iSoftBet, NetEnt, Mr Slotty and more.

To back that up, they have continuously focused on making the site more accessible to all users and by having Russian and Swedish language versions of the website, they have widened that choice and opened to players who would have otherwise been ruled out by a platform that was restricted to an English version.

Additional currency options will broaden that accessibility too: “We remain committed to providing a fun outlet for the Bitcoin community but the gaming world as a whole needs more choice. With multiple language portals and further currencies being added to the roster all the time, Oshi are striving to provide just that.”

You can read more about this operator and what it has to offer in our detailed Oshi Casino review.