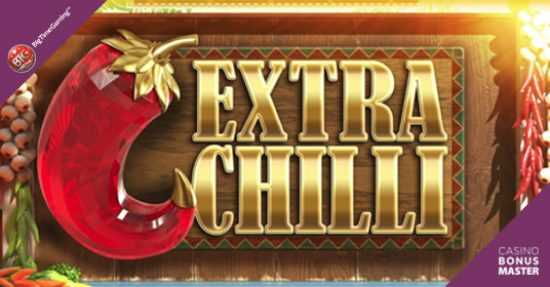 Big Time Gaming, currently one of the most popular software providers in the iGaming industry, again released another succesful video slot. Meet Extra Chilli, also referred to as Bonanza 2 amongst the online gambling community. After just weeks, this video slot is one of the most played games across all operators offering Big Time Gaming content to customers.

We could safely say that Big Time Gaming is taking big steps to become one of the biggest players in the world of online casino games. The Australian company is known for its innovative and new gaming features, providing a new wave of content in the iGaming industry. After succesful releases, including but not limited to Bonanza and Danger High Voltage, the company has now released another popular title called Extra Chilli. This new slot also boasts Big Time Gaming’s trademark creation known as ‘Megaways’.

The aforementioned titles are highly desirable amongst online punters and that’s not without a reason. What makes these slots so popular you ask? Well, that’s quite simple. They can pay big and by that we mean really really big! One thing everyone agrees on is the fact that Extra Chilli has some huge potential. The volatility is simply unrivaled. With infinite multipliers and retriggers and up to 117,649 paylines (megaways) you can easily win more than 15000 times your bet if the symbols land just right. There are already lots of Youtube videos with epic wins on the comparable slot Bonanza, and such videos will be available in the near future for Extra Chilli as well. A matter of time really, no doubt about that.

Extra Chilli boasts some interesting in-game features such as Firecracker Wilds, Extra Reel, Reactions, Free Spins with infinite multipliers and last but not least the option to purchase the bonus game, which is called the Feature Drop. The firecracker wilds stands for all symbols found in the game, with the exception of scatter symbols allowing more winning combinations. Furhtermore, this game has an extra reel right below the standard reels which adds a symbol to reels two, three, four and five. The Reactions refers to the game feature in which winning symbols are deleted and replaced by new symbols falling from above and coming from the right in the Extra Reel, allowing continous winning combinations without the need to start a new spin.

Having said that, let’s continue with the most interesting feature of Extra Chilli, the free spins (bonus) game. In order to grab 8 free spins, players need to land the letters ‘H’, ‘O’ and ‘T’, the scatter symbols. Once you land these symbols, the free spins feature will be initiated. The free spins round earns you the Unlimited Multipliers Feature in which every ‘reaction’ (winning combination) will increase the win multiplier.

Furthermore, players have the option to buy the Free Spins round through the Feature Drop. An additional part of the Feature Drop is that the price of the free spins will drop by collecting special symbols in the base game.

Another interesting part of this game is the ability to gamble your free spins, either after winning the bonus round by landing the scatter symbol or buying it via Feature Drop. Extra Chilli has an extra wheel in which players can decide to gamble their bonus rounds in order to win more free spins. The amount of free spins that can be won with this gamble feature is 12, 16 and 24. If you manage to gamble it up to 24 free spins, than things will get HOT! The potential there is simply mindblowing!

Currently, the new Big Time Gaming Megaways slot is only and exclusively available at Leo Vegas. The main release to other online casinos will take place around the 20th of April, 2018. Can’t wait? Play Extra Chilli right now at Leo Vegas, one of the best online casinos out there!