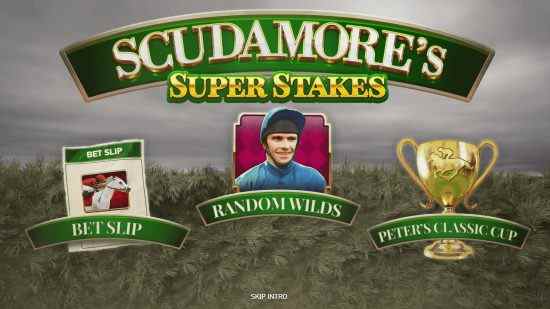 Sports betting will always have a close link with casino game betting, but what if you could merge the two together in one single entity? Well, now you can experience both in one go, thanks to the release of Netent’s new slot, Scudamore’s Super Stakes.

Bringing the races to its reels and celebrating the eight-time champion jokey Peter Scudamore MBE, this slot is sure to entertain you from start to finish. This marked the first sports-branded slot game to be released by the Netent brand, and it features five reels and three rows, with a total of 20 paylines making up the basic setup.

Just as with a real horse racing event, Scudamore’s Super Stakes builds up the excitement and thrills via its main base game before allowing you to experience a boost of entertainment when one of its various special features comes into play. And what better way could there be to give yourself a bit of a boost before this year’s exciting horse racing events take place, such as the Grand National in April?

Of course, with horse racing occurring around the world pretty much throughout the year, Scudamore’s Super Stakes is one of those games that will appeal to players at any time.

You needn’t wait too long for the special features of this slot game to show up either, because during the base game, you will get to see Random Lucky Horseshoe Wilds come into play. This sees horseshoes appear on top of random standard symbols, transforming them into wilds as they do, and giving you stronger chances of forming bigger and better wins.

Don’t forget about the bet slip that can be found to the right of the reels either. Clicking on this will allow you to make somewhat of a side wager on the slot. Basically, you get to pick a specific symbol and a minimum number of times that you expect it to appear within the next ‘x’ amount of spins. Get this bet right and you’ll be given an extra reward, with your balance reaping the benefits from it. Using this can give you the opportunity to receive up to 1,242x your in-play stake!

Things don’t end there either, because what would a slot game like this be without an appearance from a Classic Cup Bonus Feature, dedicated to Peter himself. This sees the base game extend itself to become a five-reel, four-row slot, featuring a total of 32 paylines instead of the standard 20. Prior to this, you need to back your preferred horse and if it crosses the finish line first, you can win up to 5,000x your overall stake from it!

It’s a wonderfully appealing game, which boasts the usual high standard of graphics that Netent is well-known for in the industry. Bryan Upton, the Director of Games for the brand, said that the company is “delighted to partner with Peter”, before mentioning his legendary status in the horse racing industry. He then went on to make mention of the bet slip feature being something that he feels will be ultimately popular with players of the game, although the presence of Peter’s voiceovers also adds an extra dimension to the slot.

Scudamore was also happy to have worked with the Netent brand, saying that the game captures “the fun and thrills” of the sport. He finished off by saying that he’s “proud” to have his name associated with the game, especially considering it’s the first of its type to be released by Netent.