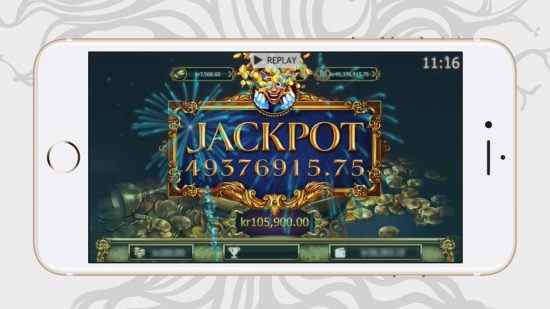 Only 13 days after a player enjoyed a record win of $7.8 million from Yggdrasil, a mobile player hits the Empire Fortune jackpot, within only two weeks, Yggdrasil gaming payout out winnings worth $10 million.

For one very fortunate Swedish mobile player, Christmas came much earlier than expected this year, great was his excitement when he hit the Empire Fortune progressive jackpot and unwrapped his win worth SEK 23.2 million. Yggdrasil Gaming’s Joker Millions slot awarded an unexpected player’s bet worth $4 with a record win of $7.8 million, less than two weeks ago.

Yggdrasil Gaming released Empire Fortune in 2016, which is the second progressive jackpot apart from the innovative developers, Joker Millions. The game offers players a jackpot wheel featuring an array of bonus prizes ranging from free spins to coin wins with the main prize being the multi-million progressive jackpot.

Both Friday’s wins as well as the biggest progressive jackpot payout ever achieved on a Yggdrasil jackpot, only 13 days ago, was hit by Swedish mobile players. The two jackpots, including Jackpot Millions as well as Empire Fortune, has rewarded now awarded a total of $29 million in payouts since 2015.

Yggdrasil Gaming’s CEO, Fredrik Elmqvist shared in a press conference just how excited the developer is to see two jackpot wins in less than two weeks. Elmqvist described the massive wins worth $10 in just thirteen days as mind-blowing and was delighted that two Swedish players will have a Christmas unlike any before. With so many operators now featuring Yggdrasil’s range of games, the jackpots increase quickly, and everyone is hoping to celebrate yet another lucky win, very soon.

Bethard, Head of Products, Adam Vella, shared just how thrilled the casino is that one of its members won this massive jackpot just before the start of the holiday period. Vella feels it goes to show just how powerful high-quality progressive jackpots are and how much excitement they build and closed off by wishing the winner and his family a Merry Christmas on behalf of Bethard Casino.