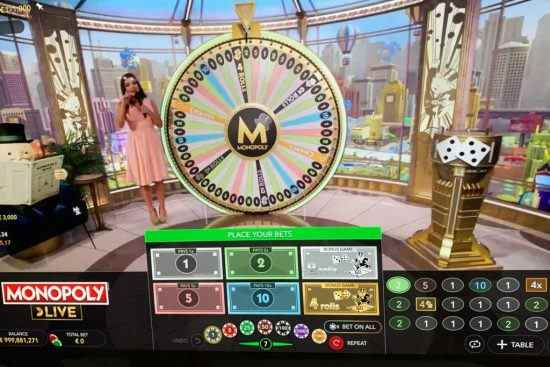 You would be forgiven for believing that Evolution Gaming has reached a pinnacle with all of the live dealer casino games that it has created over the years. From multiple versions of roulette and blackjack, through to its more unique and innovative range of games. The truth of the matter is, that when it comes to live casino games, Evolution Gaming pretty much leads the way forward. And just when you thought things couldn’t get any better, the developer crafts something known as Live Monopoly Dream Catcher.

Uniting with Hasbro, the current publisher of Monopoly, Evolution has once again excelled itself, merging the popular (and unique to the developer) Dream Catcher game with the popular board game. Promising to take the excitement and suspense of the innovative money wheel game that it created several years ago and give it a unique Monopoly flavour, Monopoly Live could be the game that we’ve all been waiting for.

If you’ve ever played the Monopoly board game, then there will be certain features of this online live dealer offering that will look familiar to you. And this Dream Catcher variant just aims to elevate that gaming experience even higher.

So, what exactly takes place when playing Monopoly Live?

Well, a live game host will spin the huge wheel that is on display, with all players taking a chance and betting on which segment the wheel will stop in once it comes to a halt. At the same time, you’ll get to see a virtual Mr Monopoly character standing by on the sidelines. He could spring into action at any time, so watch out for his arrival.

It’s not only able betting on the number that the wheel will land on, though. Instead, the wheel itself includes “Chance” sections, which can provide instant cash wins as well as multipliers. These segments are joined by areas for “2 Rolls” and “4 Rolls”, which trigger the augmented reality part of the game. This is a 3D bonus round that utilises the Monopoly board game as we all know it, providing even more entertainment to players.

How Does It All Happen?

Anyone accessing the Live Monopoly Dream Catcher game will simply need to place a bet on the number that they believe the large wheel will stop on. Alternatively, you can bet on whether it will land on a “2 Rolls” or “4 Rolls” segment. Should you make a correct bet, then you will receive a corresponding pay-out.

When the wheel lands on a “Chance” area, Mr Monopoly will present you with a Chance card, akin to the board game. This will then reveal a random cash prize for you to receive or a multiplier bonus instead. If the latter occurs, then all players’ bets remain in place and the host will spin the wheel once again. The multiplier from the Chance card will then multiply any wins from that round. Should you get another multiplier, then the multiplier itself is multiplied! That’s a lot of multiplication!

When it comes to the 3D bonus round though, that’s when things get exceptionally thrilling. All qualifying players will join the Mr Monopoly character and take a step into his augmented reality world. This sees him take a journey around the 3D Monopoly board and collect prizes, multipliers and other rewards for you as he goes. His journey is determined by the roll of two dice and the board features all of the standard Monopoly spaces, including Got to Jail, Community Chest and Super Tax.

What’s more, Evolution Gaming has made this live dealer offering available in three different language options – British English, Italian and German. So, it’s bound to spread to a wider audience share and entertain the masses in different locations.

Live Monopoly Dream Catcher is further proof that Evolution Gaming intends to continue…evolving, shall we say? It features the usual high-definition streaming that the developer is known for, whilst also serving up a thoroughly entertaining variation on Monopoly and Dream Catcher.