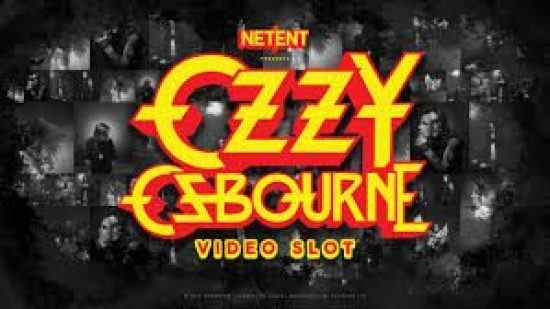 Recently, the gigantic online game provider NetEnt has released another rock star featured video slot, Ozzy Osbourne. In this sensational game, you will be thrilled with interesting gameplay and top-notch graphics.

If you are a rock music lover and a video slot enthusiast, you probably know the fame of NetEnt’s rock featured slots. After making a huge success with the groundbreaking titles, like Guns n’ Roses, Motorhead, and Jimi Hendrix, the provider this time comes for making some noise with Ozzy Osbourne video slot.

As you know, Ozzy Osbourne is one of the most phenomenal figures of the entire music history. After leaving his group Black Sabbath, the legend has been proceeding his legacy by himself. In this nominated title, NetEnt shows its respect to him in a perfect way. That’s why you can put your favourite record on and enjoy this fantastic game.

By launching this unique slot game, the provider brought Ozzy Osbourne’s half-a-century rocking legacy is back in the market! Give it a go and experience what being a real rockstar is.

When you first enter into Ozzy Osbourne Video Slot, the superstar welcomes you with a dark and gloomy theme. Moreover, with the additional heavy metal songs in the background, you will also feel the same vibe of a concert while spinning. This also makes the game fast-paced. Therefore, everything there just runs so quickly. If you are a metalhead, you will just be amazed.

Before starting the game, he waits for you to make a decision between the options of bonus bet and re-spin. In case you take the path of bonus bet, you can get up to x12 multipliers by paying double on every spin. However, in return, you will be able to benefit from the higher hit, bonus and multiplier frequencies. Furthermore, when you make a free spin, you will get an extra one.

While spinning the reels, you will meet Ozzy Osbourne himself in four different symbols. Aside from the rockstar, there are several icons that will remind heavy metal. Apparently, they are great mixtures of the symbols in a card deck and crosses, crows, and skeleton.

However, the most important symbol is the throne as scatter. In case you collect two of them on the first, third, or fifth reels throughout the main game, you can activate the Re-Spin features. Plus, this also activates the Charge Up feature, which is, basically, having a VIP ticket at a concert of Ozzy Osbourne.

A One-of-a-kind Bonus Round

When you get into the bonus round, there are two different boxes appear on the upper-right and upper-left corners. With your every spin, the symbol spinner of this round occurs on the left box while you can see the feature spinner on the right one. Afterwards, those symbol spinners just change as the feature spinner determines. This feature can be either a wild bat that explodes the reels, an indulging multiplier, a coin-win, or an upgrade.

For instance, let’s assume you get an Ozzy Osbourne symbol with 5x multiplier at the first spin and get a crow as a coin-win in the second symbol. In case you get a payline made of those symbols, your stake will get multiplied!

On the other hand, if you receive an upgrade feature with a random symbol, it turns into a higher-paying symbol throughout the bonus round.

NetEnt is thrilled about this fascinating release

After making the debut of Ozzy Osbourne Video Slot, Bryan Upton from NetEnt, who is the Director of Game Products, said a few things about it. At first, he shared his respect for Ozzy Osbourne by stating that there is no rock star bigger, better known, or charismatic than him. Afterwards, he stated how excited they are to share the reels of him with the players.

On the other hand, creating a game with a superstar theme is always hard because of the copywrites. However, regarding the reputation of NetEnt, it was not a big issue. They just got in touch with the brand management partner of Ozzy Osbourn, and the magic happened!

In this sense, the Chairman of Global Merchandising Services, Barry Drinkwater, shared his opinions about this collaboration. He said that they have a bundle of nerves due to making business with one of the greatest suppliers. Moreover, he stated that having another rockstar in the NetEnt Rocks family is very exciting for them.