Jammin Jars 2 is Finally Out 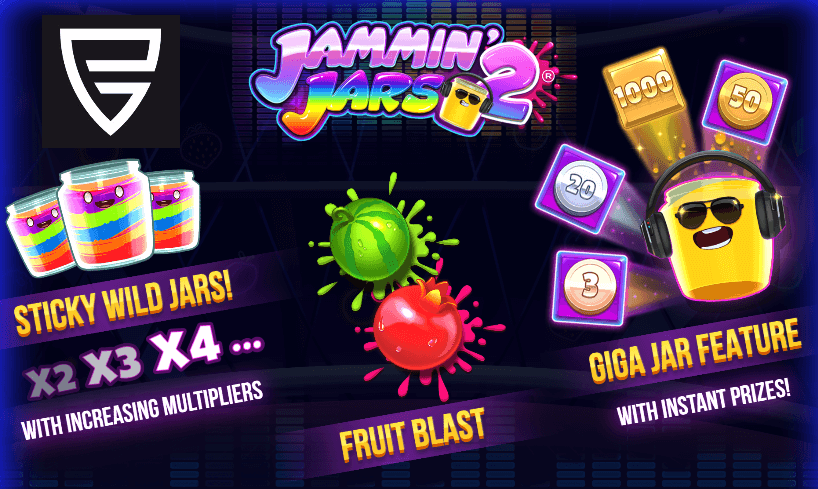 A while ago Push Gaming announced that they were working on a sequel of their extremely popular video slot Jammin Jars. We’ve been waiting with bated breath for Jammin Jars 2 and it is finally here. The million dollar question is: is it as good as the original, even better or worse?

As soon as software providers announce a sequel to popular video slots our hearts starts beating like crazy. Nothing is more frustrating than when a sequel fails to live up to the original. Well let us cut to the chase and bring you the news. Jammin Jars 2 is a fantastic sequel that lives up to the original in every way. The game has more levels, new music and gameplay elements that will keep you entertained for hours on end! It’s bigger, graphically more beautiful and even more powerful!

Jammin Jar 2 has an identical bet range compared to its original thus catering well to both small and high rollers. Players can choose to bet between 0,10 and 100 per spin. The theoretical Return to Player (RTP) stands at 96.4% which is fairly average. Push Gaming has cranked up the maximum possible win from 20.000x to 50.000x though making Jammin Jars 2 extremely volatile.

Jammin’ Jars 2 is played on a 8×8 grid. Like all other matrix grid slots working on the cluster pays principle, in this version you need to spin a minimum of five adjacent symbols in clusters before winning any prize. The bigger the cluster, the bigger the prize. The grid is then set for a fresh round of fun as you watch the winning clusters disappear in a re-spin and make way for new symbols! 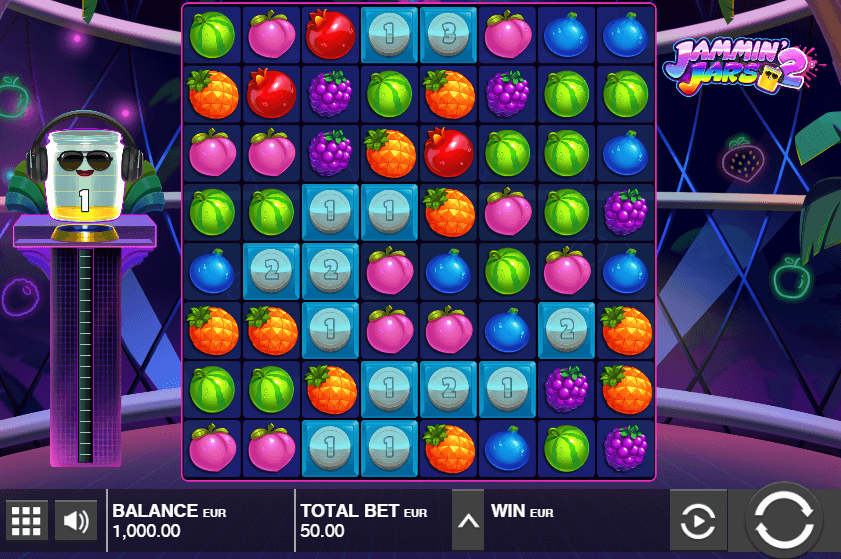 Like the original, there are 6 different fruit symbols in Jammin Jars 2. The familiar Jam Jar Wilds are also back in action. Except that they act as wilds and replace other symbols, these bad boys also move over the grid to boost your winnings. They also contain multipliers that increase by +1 when they form a winning combination. And it gets even better. If you manage to get more of them in one winning cluster their multiplier ‘multiply together’ for even higher prizes. Lastly, they also act as the game’s scatter symbol.

Landing 3 or more Jam Jar scatter symbols will activate the game’s Free Spins bonus feature. The Free Spins feature in Jammin Jars 2 is the same as in the original, providing players with 6 free spins and the Jam Jar dancing wilds with increasing multipliers.

The game makers have added some new features to keep the entertainment level as high as possible. The developer incorporated instant prize coins to the overall gameplay. These instant prize symbols act as any other fruit symbol and can be activated when a cluster of at least five coins is formed (you can recognize these as a blue tile). Players will win the sum of all coins that are activated, which can go up to a staggering 1000x each!

In terms of new features, Jammin Jars 2 bring us the Gold Vinyl Collectables in the basegame and subsequently the Giga Jar Feature. Collecting the Golden Vinyl items during the base game will help players progress to the next level. These Golden Vinyl symbols are added to the Jammin DJ meter. In order to win the Giga Jar feature, you’ll need to reach the fifth and last level.

As soon as the last level is reached, players can possibly trigger the Giga Jar Feature. In order to trigger it, you will need to land a gold vinyl symbol. Once triggered all symbols are removed from the grid. Thereafter, 3 or 4 Jam Jar Wild symbols are added on random positions on the grid. Additionally, the Giga Jar block symbol will drop on to the grid.

We have seen many cases in the past where software providers made a mess with sequels. Think about Reactoonz 2. That sequel was just bad to say the least.

This definitely isn’t the case with Jammin Jars 2. Push Gaming has taken the sequel to a whole new level. The upgrade in layout and refined features makes this even more fun than its predecessor. No doubt about that.

Want to give Jammin Jars 2 a try as well? Click the button below to get started right away!