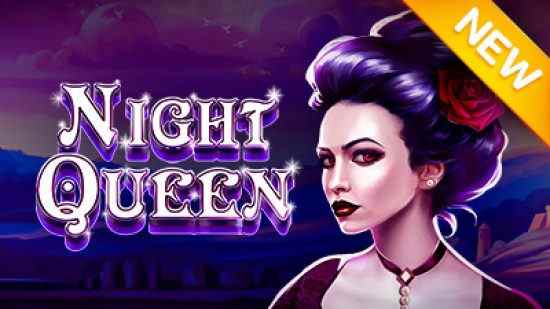 A few days after releasing the sequel of its famous video slot Hot Shots, iSoftBet released its latest title; Night Queen. The UK-based mobile casino games software provider has been highly active in the market in these days. The vendor has been releasing new and innovative slots on a regular basis.

Night Queen has a gothic vibe at first sight and has crisp visuals details throughout your gaming journey. Set in a gloomy Transylvanian Castle, the slot has a vampirish theme along with a dark and attractive background.

The title has a variety of symbols from low paying 10-A royals to premium symbols including a raven, a stallion, a Victorian gentleman and obviously the fearsome queen of the night.

The video slot has a lot to offer with exclusive bonus features and rewarding gameplay. It is a 5-reel 3-row online title with 20 paylines. It is a traditional reel design that we are accustomed to seeing in iSoftBet online video slots.

iSoftBet succeeds to charm the players with a variety of exclusive features to enhance the rewarding gameplay and add an extra layer of entertainment. The title offers a Switching Stacks Mechanics, which will allow you to switch stacked symbols after any spins. Thanks to these features, it is possible to see innovative gameplay that will lead you to more winning combinations.

If you are able to land three or more stacked symbols, they form a mega symbol. This symbol can trigger a multiplier up to x30, which will be added to the win.

There is also a Super Stacks Feature, which will turn a randomly selected symbol into a super-stacked one on each of the five reels. In extra spins, these symbols lead to enormous win potential.

To trigger the bonus spin rounds, you should land three or more Night Queen scatter symbols anywhere on the reels. After activating the round, the Mystery Symbols land stacked and may switch into Switching Stack mode. The symbols can reveal after the spin or during the switching leading more Super Stacks on the reels. Consequently, you can get massive payouts combining these exclusive features.

On the Night Queen

At the press release of the new title, Mark Claxton, iSoftBet head of the games, mentioned the enormous potential of the game by saying that the title brings tested land-based gameplay into your palm. Moreover, according to his statements, Night Queen is a visually exciting slot with a ghoulish and haunting theme inspired by classic novels.

Mark Claxton also stated that the title is packed with stacked and mystery symbols along with a unique Switching Stacks mechanic. Moreover, mentioned that thanks to colossal multipliers and compelling gameplay, the players will be impressed as soon as they enter the castle of the mysterious Queen of Night.