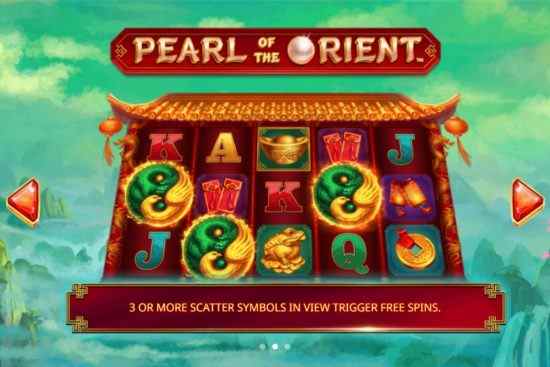 Famed for its supreme slots portfolio, iSoftbet just announced the release of Pearl of the Orient. Players are invited to enter a mystical world where symbol upgrades, free spins and expanding wilds encourage you along the way, as all focus is placed on finding the priceless pearl.

Guarded and bordered by golden dragons, iSoftbet’s, Pearl of the Orient plays off within a classical setting home to several spiritual Asian-themed symbols. A slew of highly engaging features are presented on five reels with ten paylines that win will be formed on. The most impressive aspect to this slot is the symbol upgrades during the free spins, and for those who like big win slots, this can lead to impressive payouts.

Multiple line wins are offered via the striking geisha acting wild across the second, third and fourth reels, which also expands to take control of the entire reel and increase the possibility of profits via substitution. The Ying Yang symbol is the scatter and pays regardless of where it appears, while it activates twelve free spins, and should an expanding wild show up, she removes one of the symbols and transform it into one of the highest paying symbols.

Michael Probert, the Chief Commercial Officer at iSoftbet, describes Pearl of the Orient as an exceptional slot packed with Asian symbols, stacked with fantastic features, which takes online players on an enthralling journey to Asia. Stunning wins is forecasted for the symbol upgrades taking place during the free spins bonus round. Probert feels fans will return time and again due to the incredibly compelling gameplay offered by Pearl of the Orient slot.

During 2018, iSoftBet achieved great success via major offerings, including the release Legend of Loki introducing players to the shape-shifting god of Norse mythology, while the fierce and fast Hot Spin slot release turned up the heat. More spinning thrill awaited in Super Fast Hot Hot Respin, while the October release, The Dalai Panda, challenged players to master and manipulate big wins across 729 ways to win.

Yet the highlight of 2018 is undoubtedly the fact that iSoftbet is shortlisted for the SBC Casino Beats, Game Developer of the Year award, with the award ceremony taking place on the 4th of December in London.