Enter the world of Play ‘n Go with Legacy of Dead 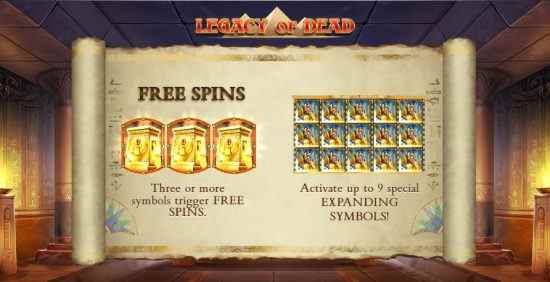 Play’n Go has long been one of the most authentic developers to focus on the Ancient Egyptian theme. Delivering one award-winning game after the next, Legacy of Dead is a continuation of this proud tradition.

One of the freshest releases in 2020, Legacy of Dead sends you back in time to face the mysteries of this ancient civilization. Furthermore, the developer has already established a successful track record.

Titles such as Doom of Egypt, Ankh of Anubis and Rise of Dead have attested to the company’s success. With this said, Legacy of Dead is just an aperitif to what is coming in 2020. Play’n Go has decided to rev up the number of titles it will introduce this year with some 51 games.

In other words, players can expect four or so slot games month in and month out. Excited to find out how many of these will be about Egypt? So are we! In the meantime, let’s take a closer look at Legacy of Egypt for what it is.

Probe the Mysteries of Egypt – Again

Even though Play’n Go has many Egypt-focused games, they are all unique. Offering a variety of designs and plots, the Swedish studio stays on top of the iGaming world. Once again, you enter Ancient Egypt with a familiar 5-reel grid and a completely new overall experience.

This time, you will have to help an Egyptian King to retrieve a treasure. Be careful though, because there are quite a few twists and turns to face on your own! True, we have seen quite a few unique Egyptian titles these past few years, but Play’n Go has managed to create unique gameplay for each and every one. After their monster title Book of Dead, they have again managed to create a new slot title which has been received very well by the gaming community.

Better yet, you will never miss out on a plethora of symbols beautifully designed to correspond with the theme of the game. This way, you will find a variety of familiar game elements, such as the Anubis and Tutankhamun himself, the legendary Egyptian Pharaoh.

With a cool jackpot of 500,000 coins, Play’n GO has taken care of both budget and high rolling players! You can stake as little as 0.01 per spin or push your bet all the way up to 100 units per a single spin!

A Record-Breaking Year Continues in 2020

Commenting on the latest successes of the studio, Play’n Go chief executive Johan Törnqvist said that after a record-breaking 2019, 2020 would see an equal – if not greater – number of games. Legacy of Dead, Törnqvist explained, is just the first in a series of awesome titles to come.

Clearly, Play’n Go is once again focusing on quality slot entertainment as it has done in the past. But the company is not the only one to have a tight grasp on this iGaming sector. NetEnt and Microgaming have also decided to rev up their number of games.

This year will clearly present challenges for developers in terms of competition. However, if you are on the receiving end as a player, you can expect a slew of awesome games coming your way!