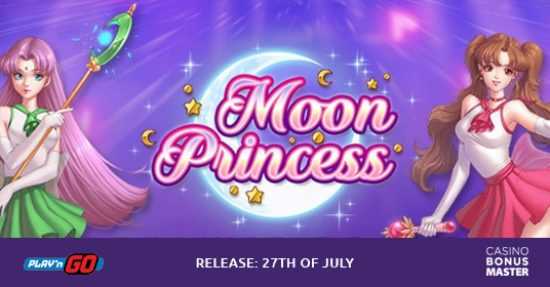 Play ’n Go’s latest installment called Moon Princess is an anime themed online slotmachine which has both beautiful graphics and animations. Its based upon the Japanese Sailor Moon anime series which recently celebrated it’s 25th anniversary.

The game’s played on a 5 by 5 grid, has 20 paylines and is compatible with PC, tablet and smartphones. Just like most slot machines you win by acquiring 3 similar symbols in a row – either horizontally, vertically or diagonally. After hitting a winning row, the row will disappear and the empty space left behind will be filled up with the next remaining symbols, which then creates new winning possibilities/winning rows. A multiplier goes up after every winning row (up to 20x) and the turn will eventually end when there’s no more winning combinations left on the grid.

As a bonus feature – which is triggered randomly on a non-winning spin – you have 3 princesses at your disposal, each with their own unique ability. They help you clear the grid as much as possible when there are no more winning rows left after your initial spin. The love princess transforms 1 set of symbols into another symbol, the star princess adds 1 or 2 wilds (the moon symbol) and the storm princess removes 2 sets of symbols.

Last but not least there is the free spins bonus feature. The free spins round can be activated in two different ways:

As a final conclusion we are obliged to say that Play ’n Go lived up to their standards and made a profound, colorful and fast paced slotmachine. Moon Princess is scheduled for release on 27th of July!

UPDATE: Moon Princess from Play ‘n Go is out now! Play this colorful and feature-rich slot at Insta Casino now!