Coming Soon – Planet of the Apes by NetEnt 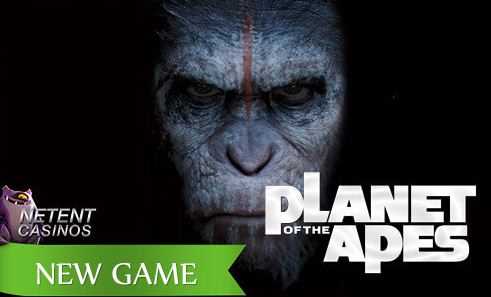 The game is divided into two phases of the life of Ceaser, the leader of the army of monkeys, possessing several areas of the two films, each with 5 reels, 3 lines, and 20 other fixed lines. The game also features Free Spins, bonus symbols, Wild features, Dual features, and more Dawn and Rise bonus features, even doubling up reels and combining elements from both films, showing a unique monkey planet to explore.

The thematic backgrounds of Planet of The Apes contribute to creating a strong connection with this slot, based on the two films, with authentic images of the two films that appear in the intro, and the game is constructed literally from there, creating a game experience unique The graphics are classic, presenting human symbols and quite symbolic, since the game is based on an alternative reality, being the monkeys to control the world, and it recreates well-known personages of the film. Adding these elements the game still contains sounds, some voices, and animations, enriching the experience even more.

The Rise Bonus feature is a virtual add coin that is added for each human and monkey symbol that appears on your screen except when the scatter symbol is activated and appears only in the Rise play area.
There is also the option of free spins, which are given when Wild symbols land on each rotation and are collector by a Wild meter. When the coil stops spinning, all wild symbols are placed randomly in the playing area and once finished, victory is assured.
The Dawn Area

There is also bonus features Dawn, which turns monkey and human symbols into the same symbol, and only appears in this associated playing area. For Dawn Free Spins, only the dawn game area is activated with 3 different collection symbols: The Multiplier, the Extra Wild, and the Extra Free Spins. When the meter is full, it activates a feature with each meter, requiring all 3 symbols to become full. The Extra Wild meter turns one of the human symbols into an Extra Wild symbol each time it is filled by the rest of the Free Spins.

To conclude, the slot is in HTML5 format and available to play on your desktop, on your phone, and also on your tablet, available on all platforms of your operating system. Planet of the Apes turns out to be a really fun and suspenseful slot since it is based on both films. It has an RTP of 96.33% and can reach a maximum victory with a rotation of 600 thousand coins. The game will be released on October 23, 2017.