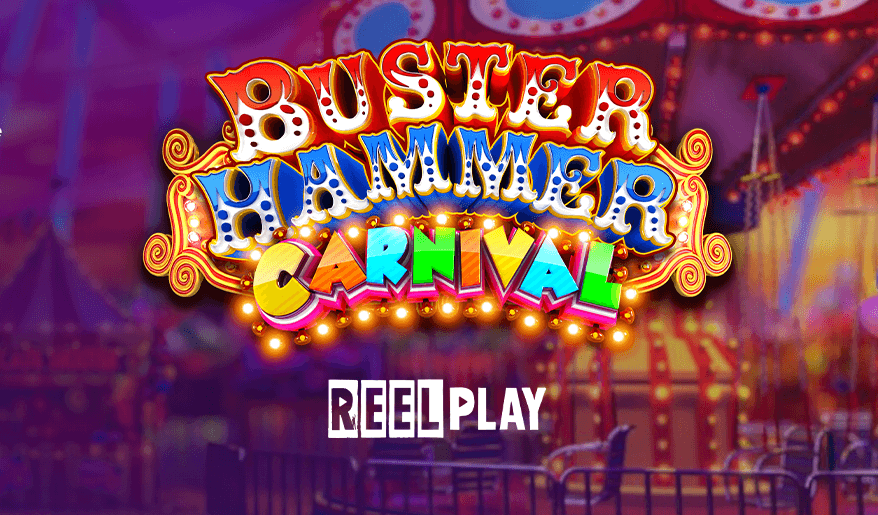 The 5×5 grid video slot flaunts 3,125 pay lines in the base game. The Mighty Free Spins bonus adds multiple opportunities for expansion while increasing the grid size to 5×8. The game is designed on a bustling and bright carnival theme and is designed using Yggdrasil’s advanced GATI technology.

What does Buster Hammer Carnival offer for players?

ReelPlay is consistently creating cutting-edge content and releasing it worldwide at a phenomenal pace with the help of the YG Masters Program. The game’s protagonist, Buster, is the carnival strongman and the star of the show. He bides his time standing next to the reels as he prepares to test his strength by thumping the Wild Hammer when it appears across the reels.

Both the Wild and the Gold Wild Hammer replace all standard symbols, which include 9-A card values, a hot dog with mustard and ketchup, a trio of bulls eyes, and a pair of carnival tickets. If players land one or more Wild Hammers across the reels, the Wild Striker Feature comes to life.

The Gold Wild Hammers can appear on every reel but shows up only when the Wild Striker Feature is active. The win depends on how much effort Buster puts into the strike via the expanding reels feature.

Landing at least three scatter symbols triggers the Mighty Free Spins round, and when that happens, the canopy expands to create room for the extended reels, which enhances the game’s winning potential by 32,768-times.

Perks of the YG Masters Program

Yggdrasil’s Head of Partner Programs, Stuart McCarthy, called the title “another fantastic addition to the portfolio” in the official press release. McCarthy added:

“Buster Hammer Carnival combines the fun of the fair with the action of a thrilling slot”.

He went on to commend ReelPlay for consistently developing innovative titles through the partnership program.

“As part of the YG Masters Program, we’re able to consistently scale up our roadmap and launch games with partners across the world with phenomenal success”.

The CCO expressed his fondness for Buster and revealed that the studio had “a lot of fun” designing and animating the character. Johnson also added that the game preserves all the key elements that ReelPlay is known for and is excited to see how fans react to the game.

Buster Hammer Carnival follows closely in the footsteps of Reel Life Games, which recently joined the YG Masters Program. The Chicago-based studio plans to make the most of Yggdrasil’s technology and use it to boost its current gaming lineup.

“We’re looking to quickly expand our portfolio and enter new markets. Yggdrasil offers the perfect opportunity for accelerating our timeline.”