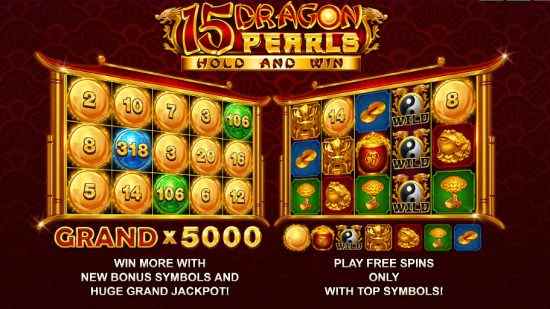 Popular iGaming software developer, Booongo, recently launched its latest slots title, 15 Dragon Pearls. The game marks the second volume of the popular Dragon Pearls series and is designed around an Oriental theme. The developers retained The Hold and Win mechanics from the original title, which the veterans will appreciate.

Players must collect pearls from the reels to trigger the game’s Grand Jackpot. The bonus round initiates six instant re-spins. Players must collect all fifteen pearls during this time to win a prize. Along with the Grand Jackpot, players also have access to a special spin mode, which is triggered by the appearance of three Red Bowl Scatters. This round invokes high paying symbols, offering a chance to win larger prizes.

15 Dragon Pearls by Booongo is a 5-reel, 3-row title offering 25 paylines. Its best rewards are from fixed jackpots where the Grand Prize is worth 5,000x the total stake. While standard prizes are only worth 250x.

From scatters, wilds, and free spins, the game offers a range of opportunities for players to trigger a jackpot-winning bonus score, especially at the higher levels. And the chances increase as you play. Starting from €0.25 to €40, the game starts with 25 active paylines, including multiple wagering amounts between the extremes.

Under ideal circumstances, the bonus triggers the game’s highest payout of 5,000x total stakes. Although scoring isn’t as easy as the previous title! The biggest drawback, perhaps, is the lack of serious payouts. In a normal scenario, players can win up to 10x total stake per combo, at the most. Thus, adding up to 250x total stake when the screen lights up with the best symbols!

The appearance of the Yin Yang marks in-game Wilds, which contribute to the winning combination. Wilds can appear stacked on the reels, often substituting symbols for maximum impact. However, wilds aren’t the ideal replacement for the game’s feature symbols, which are still worth a lot more.

15 Dragon Pearls triggers a special eight-spin bonus when the Pot of Gold icon lands three times in the middle column in a single round. This is a significant feature as only high-value symbols appear by removing existing low-value positions. Players can also retrigger free spins on earning a set of three scatters.

The designers haven’t spared much thought on the theme, sticking to a traditional Asian/Oriental design. With Dragons as the primary symbol, the top paying logos include Money Trees, Toads, Four Royals, and Gold Coins. The game’s feature symbols include a Pot of Gold, Yin Yang, and Pearls.

15 Dragon Pearls is a fun video slot for beginners. This low-to-medium volatile game won’t appeal to veteran gamers but is an ideal introduction for amateurs. Although the title doesn’t offer many novelties, it’s got a few good features up its sleeves. But the game relies heavily on the Hold and Win bonus to offer players their biggest wins.