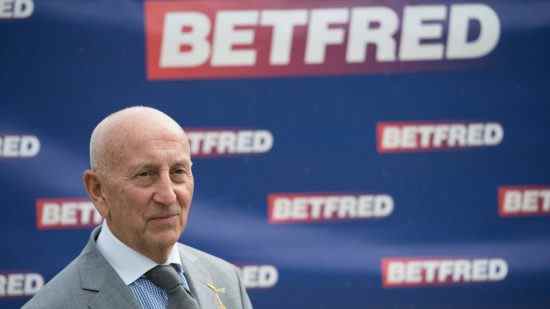 A six-figure boost is to be given to a £4 million appeal in order to come up with funds for a vital piece of equipment that will cater to children who are facing life-threatening illnesses. And the location that that donation will come from? Betfred boss, Fred Done.

The Birchwood-based owner made the announcement that he is to donate all proceeds from over-the-counter bets that are placed on Tuesday, 12 March throughout his 1,630 betting shops. That money is to be given to the iMRI Appeal, making it quite the considerable donation to such a worthy cause. All revenues collected on the day will be put towards the Appeal, with the date marking the opening day of the Cheltenham Festival. Not only that, but bets will be coming from the Champions League day, thanks to Manchester City facing off against Schalke.

The Appeal is in place to fund a piece of equipment known as intra-operative Magnetic Resonance Imaging (iMRI). It is this that will assist children across the north-west of England who are being treated for life-threatening and debilitating diseases and conditions. These conditions include brain tumours, issues with central nervous systems and even epilepsy.

Fred, spoke of the Appeal for this piece of equipment standing out to him, due to the fact that he lost his wife Mo in 2018, following her being diagnosed with an incurable brain tumour. Speaking of the upcoming donation to the charity, he said that he felt humbled to be in a position to be able to assist with the Appeal for some “much-needed equipment”. He touched on his own personal experience with life-threatening situations, stating that he is aware of the importance of being able to utilise world-class equipment to help save lives.

“I feel privileged that I can help…”, he said, before hoping that the best scanner will come to prominence in saving the lives of children from all over the country.

The donation itself will be underwritten to an amount of $100,000, meaning that the charity will receive at least this figure. Yet, that could be quite significantly higher. It all depends upon the results of bets placed in the land-based Betfred shops today with the kick off of the Cheltenham Festival.

Regardless of which, there’s little doubt that the donation will provide the Appeal with a huge boost, propelling it ever-closer to attaining the iMRI scanner. This will then be based as the Royal Manchester Children’s Hospital. Around 270,000 children are treated there on an annual basis, with brain surgery being one of the largest priorities.

The scanner allows surgeons to scan a patient while an operation is taking place, taking advantage of being in a sterile environment. As things stand at the moment, children can wait several days after a procedure has taken place before they are capable of going through a scan. Naturally, this can be quite a stressful and scary time for such young patients, as well as their families. With the inclusion of an up-to-date iMRI scanner, children face brighter futures and better outcomes. Plus, fewer surgeries are expected to be needed with the machine.

Speaking of the donation from the Betfred owner, the chairman of charities at Manchester’s hospital, Maurice Watkins CBE, said that he is incredibly grateful to Fred. “We appreciate how special it is when a donor has a personal reason for reaching out…”, he continued, before stating how privileged the hospital is that Fred chose the iMRI Scanner Appeal to support.