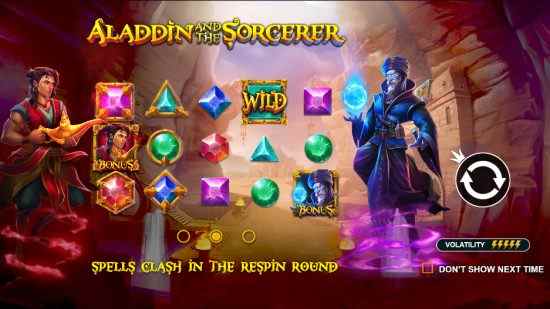 One of the most productive suppliers in the iGaming industry, Pragmatic Play, continues to bring excitement to online casinos with another impressive game. After launching its live tables to different regulated markets, the provider this time comes for a massive shot with its brilliant slot, Aladdin and the Sorcerer.

With an interesting conflict between two main characters, the game wants you to go and help Aladdin to beat the Sorcerer. In the end, big rewards are waiting for you. Just rob the lamb of Aladdin and make pieces of jewellery spin on the reels.

In an endless dessert, this 5×3 slot comes with 20 paylines and 96.23% RTP rate. Furthermore, with its authentic background music, the game takes you inside to take place in this battle of two powers.

What happens when both of them appear? At that point, the war starts between two powers, and they take you another stage of the battle, the re-spin round. Throughout that round, you must help Aladdin to win and bring you to the second re-spin level. Otherwise, the Sorcerer takes everything.

During this bonus round, both of the characters have their life bar at the top of the screen. After every round without the other one appearing, the winning character casts a spell over the losing one. Still, you can obtain wilds with every bonus symbol landing.

Aladdin’s magic is not going to stop! Furthermore, it gets more and more charming every second. After beating the Sorcerer, you receive three more free spins with the sticky wilds from the previous round. Plus, the multiplier of wilds increases after each re-spin.

Pragmatic Play robbed the lamb and waits for the magic

Chief Commercial Officer of Pragmatic Play, Melissa Summerfield, shared her opinions after making this sensational debut. First, she said that Aladdin and the Sorcerer is a perfect addition to their best-in-class slot portfolio. She believes that as an action-packed title with excitement-boosting features, embracing storyline and huge payouts, the title maintains its players to have their fairytale endings.

Pragmatic Play is one of the biggest game suppliers in the online casino world. Since the very first day, the company provided amusing titles in different categories, such as slots, live games, and bingo. Moreover, thanks to its dedication to making its product as engaging and innovative as possible, the company collected multiple awards with its titles like Sweet Bonanza, Wolf Gold, and Mustang Gold.

By allowing every currency on earth in 31 different currencies, the company destroys the borders and make its players feel home. Furthermore, with its regulatory licences from the UKGC and MGA, Pragmatic Play puts standards as high as it goes.

PLAY ALADDIN AND THE SORCERER NOW