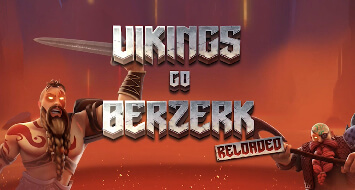 The Vikings have gone wild. In the new Viking Go slot from Yggdrasil gaming, Vikings go Berzerk Reloaded, players can enjoy free spins with cinematic intros and atmospheric soundtracks that are full of battles.

The Yggdrasil team started with Vikings Go Berzerk in 2016, and instead of simply releasing a new version like before, they took the time to make some radical changes. They’ve increased potential for all their players but left the core features stil recognisable. Last but not least has the gameplay been giving a makeover to be more in line with the current trends of volatile gaming.

In this Vikings go Berzerk reloaded slot review we’ll tell you everything about this wild new game!

The short intro for Vikings Go Berzerk Reloaded is different than the one before. It gives you more time to process what’s happening and adjust accordingly!

The main familiarity is the game grid, composed of 5 reels and 4 rows. 25 Fixed paylines are covered in this same set symbols but there’s a new icy location where it’s not clear what exactly goes on. An intro video could’ve helped clear things up. The Rage meter has been removed from the game, but players still have access to their Viking Berzerk mode. Wilds will be more sticky and harder than they were before in this new update! Replayed volatility has been turned up to a medium-high setting, transforming the experience into one that is more demanding and potentially rewarding. The RTP is the nicely rounded figure of 96%, while hits have a average hit frequency at 24%. All devices are suitable to play Vikings Go Berzerk Reloaded on where stakes vary from €0,25 to €50 max bet per spin. A great online slots game allows players’ chances for winning big during each spin.

Landing three to five matching symbols across a payline will result in winning. There are 8 regular symbols in Vikings go Berzerk Reloaded. These include four low paying ones as well as four valuable Viking symbols which can increase your chances of getting more wins! If you manage to land a line of five premium character symbols, this results in the ultimate win! A 6-10 times return on your total bet.

To win bigger, wild symbols are there to substitute pay symbols and complete line wins. However one major difference now is that some of the wild symbols contains multipliers of x2, x4 and x8! These are called wild multipliers. I hope you’ll receive a bunch of them!

In the free spins mode, Rage meters are not present but it is still possible to make characters go berzerk. Other features include gamble options, Ragnarok Spins and Chests. These appear at certain moments when the player’s luck is needed most! Battle the Sirens and sticky wilds

When Viking Symbols land on the reels in the bonusgame, they each battle an evil Siren. If you can defeat them in combat and keep them alive, they transform into sticky wild symbols which remain stuck during the entire bonus round.

It’s no surprise that the Vikings are ferocious and competitive. When they’re in Berzerk mode, there is nothing that can stop them from winning their battle! Furthermore it is possible that wild symbols may upgrade into x2, 4x or x8 multipliers for all remaining rounds of this feature.

Only in the free spin bonus spins it is possible to land chest symbols on the reels. When they hit, you’ll receive prices such as; +1-2 sticky wilds, +1-3 extra free spins, +1 free spin and an extra Berzerk Viking or double wild multipliers for the one spin. (x8 is the max)

It is possible to trigger the Ragnarok Spin in both base game and free spins. If you get a Viking on your turn, then all other Vikings will also go Berzerk for that one spin!

Whenever players trigger free spins, either organically or by buying them, they can play the free spin gamble. To gamble with this feature you have 2 bags to choose from. One bag will give you nothing! You return to the base game and you’re not allowed to use the free spins. The other bag wil give you a path to follow. Follow the right path and you’ll receive 1-4 Berzerk Vikings to start your bonus game with. If buying the bonus is an option, players can gamble 75x their total stake to land at least 3 scatters symbols on the next spin. Once triggered you have two options: play or bet it all!

The creators of Vikings Go Berzerk have created a new sequel that is so different from the original, it’s going to be interesting to see how people respond. The game has lost some features in order to make things more challenging and rewarding. When designing this go Berzerk Reloaded slot, it seems like Yggdrasil had big win videos in mind. After all they are known for their brutal high-performance games that dominate the market at this moment.

Another major difference is how much more stake you can win with in Vikings Go Berzerk Reloaded. Before, the maximum bet was 4.000 x your max coins but now it’s up to 25K!

The Vikings Go Berzerk Reloaded is full of features that are designed to be a little more challenging than your average video slot. For the most part, these wild adventures can’t help but put you on the edge of your seat. Let’s go Berzerk!