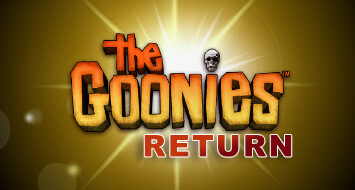 Following the success of the original Goonies slot, Blueprint Gaming is back with a sequel – The Goonies Return, and they do it in style. With a refreshed design and modern graphics, Mikey, Brandon, Data, Mouth, and Chunk’s second coming is just as exciting as the first one.

With many bonus games and 10 random modifiers, you are in for an absolute thriller of a slot. There are so many features to keep you entertained and help you and the Goonies find One-Eyed Willy’s treasure and pocket some wins. Check out this The Goonies Return Blueprint Gaming slot review to learn more.

The Goonies Return: Gameplay and Features

The core mechanics of The Goonies Return are precisely the same as the first game, with 5 reels, 3 rows and a 20 paylines format, while the winning combinations are made by landing at least two matching symbols in line from left to right. The slot has a medium to high variance, meaning you can expect rather big but infrequent wins. You can place bets ranging from €0.10 to €100 per spin, while the game’s RTP is at around 96%. 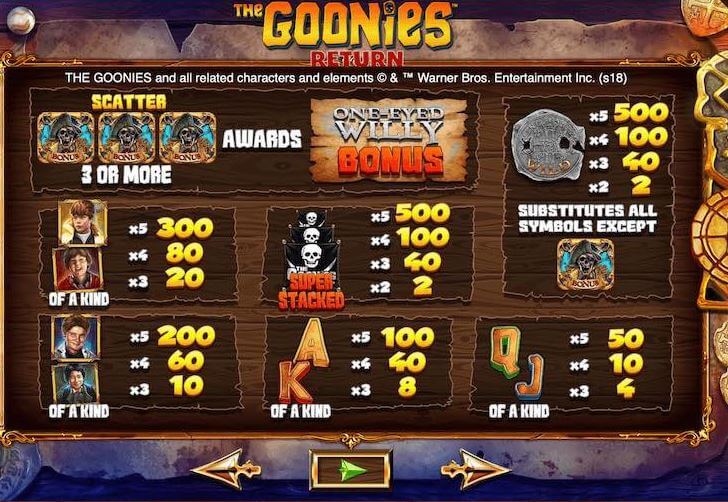 Visually, the slot is reminiscent of the 80s, just like its predecessor, though some details are improved and made crisper. You can see the characters and the coveted treasure from the movie and hear a familiar soundtrack in the background.

The symbols in the slot include a Jack, a Queen, a King and an Ace as the low paying symbols, and Data, Mouth, Mikey and Chunk as the high paying symbols. There’s also the pirate flag symbol ready to give you wins, as the symbol appears on all 3 rows when it lands anywhere on the grid. The game’s wild is an old coin symbol with the word written on it, and it substitutes any missing symbols you need to make a win.

The first Goonies slot attracted a lot of attention from gamblers due to the large number of extra features it offered. Now you can look forward to even more chaotic gameplay because the number of modifiers and bonuses in The Goonies Return is even larger.

Starting with the One-Eyed Willy bonus, there are a total of 10 different random modifiers that can be triggered by landing matching symbols in the base game. When you trigger one of them, he will offer you keys from which you need to choose one. Depending on the key you chose, you will activate one of the following modifiers:

As for the modifiers that aren’t triggered by a winning combination, you will see the spin button glowing after the round is finished. They can do one of the following effects: Whenever you land a win of at least x15 of your initial bet, you will get the One-Eyed Willy riches, and he will offer you an exchange. This means risking your win for a chance to spin the bonus wheel and earn a super bonus, mega bonus or a mystery prize.

In addition to the bonus rounds mentioned above, One-Eyed Willy also has a bonus offer ready, and he’s here to give you tons of freebies. For starters, you can trigger the Final Voyage free spins and turn the grid on fire. You can then expect your reels to fill with wild bonus symbols for 5 free spins.

The Fratelli free spins feature is worth looking into too, as you’ll get 10 freebies with bonus funds expecting you at the end of the round. Wherever the Super Sloth Wild lands on the grid during this round, it’ll highlight the position and give you extra cash prizes.

While it could look intimidating at first glance, The Goonies Return slot is a lot more intuitive than it appears. Sure, the vast amount of features could be mesmerising, to say the least, but they’re also incredibly rewarding. Still, it’s precisely what one would expect from Blueprint Gaming – a slot title packed with fun that will keep even the biggest adrenaline seekers on the edge of their seats.