In this new online slot – Shield of Sparta – from Pragmatic Play, the windswept Peloponnesian plateau tilts dramatically down into the rough wintery waters of the Ionian Sea. There’s a number of Ancient Greek slots on the market. Shield of Sparta is another one.

A rugged coastal scenery is used for the base game, while a battle scene takes over the bonus game. Despite the different scenery, Pragmatic Play has failed to come up with anything that will surprise players familiar with this theme.

Shield of Sparta is a game that spans the usual range, with warriors and helms to swords or ships. Shield of Sparta is by no means unattractive, but its look isn’t the most inspirational either. Let’s dig in and see what the ancient Greek has in store for us. 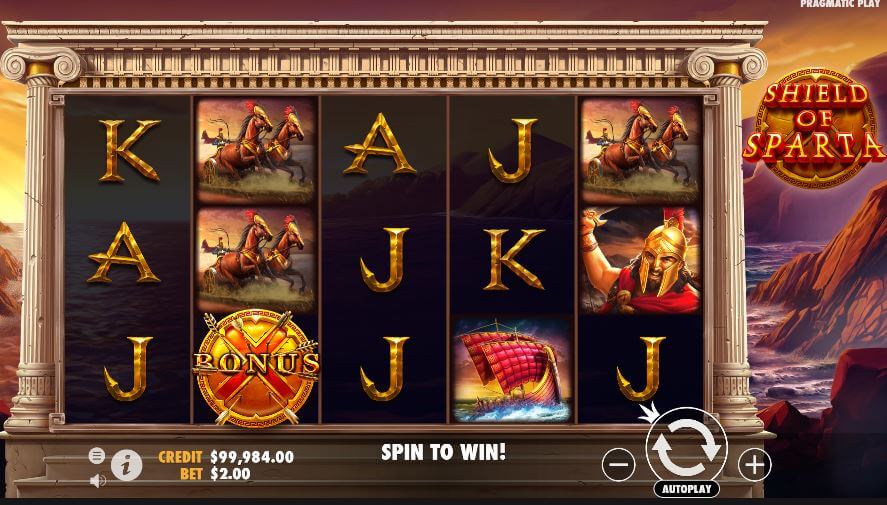 Amidst the stylish architecture of ancient Greece, one can find a 5 reel 3 row grid with 20 paylines for landing combinations that comprise three to five-of alike symbols.

Three different RTP values are possible, the paytable will let you know if your bet is standard 96.5% or the 95.5%/94.5% version. Shield of Sparta is a highly volatile slot though the bonus game triggered quite frequently. According to the stats, the hit rate is 1 in 125.

Shield of Sparta is playable on any device where you can place bets from 0.20 up to EUR/USD 100 per spin. Finally, the maximum win is a lean 3,000x the stake.

With the J-A card ranks, players can get paid 5x their bet for five-of-a-kind. The four high-pays are chariots, catapults, ships, and warriors. These symbols are worth 15 to 25 times the stake for a five-of-a-kind which is not bad at all.

A close-up headshot of a warrior is the wild symbol. Wilds substitutes for all other symbols except the scatter.

The Shield of Sparta is a rather basic slot machine. Though there’s a respin available in the base game and a multiplier component in the bonus round.

When hitting 3, 4, or 5 scatter symbols, you will be awarded 10,15 or 20 free spins. The position where the bonus symbols landed, will be highlighted with a frame. When a new bonus symbol(s) lands in this frame, the position is upgraded up to a maximum of three levels.

At the end of the bonus round, all the highlighted positions display a random multiplier, depending on which level you’re at.

You can retrigger the free spins by landing 3 or more scatter symbols. The same free spins will be awarded as mentioned above. 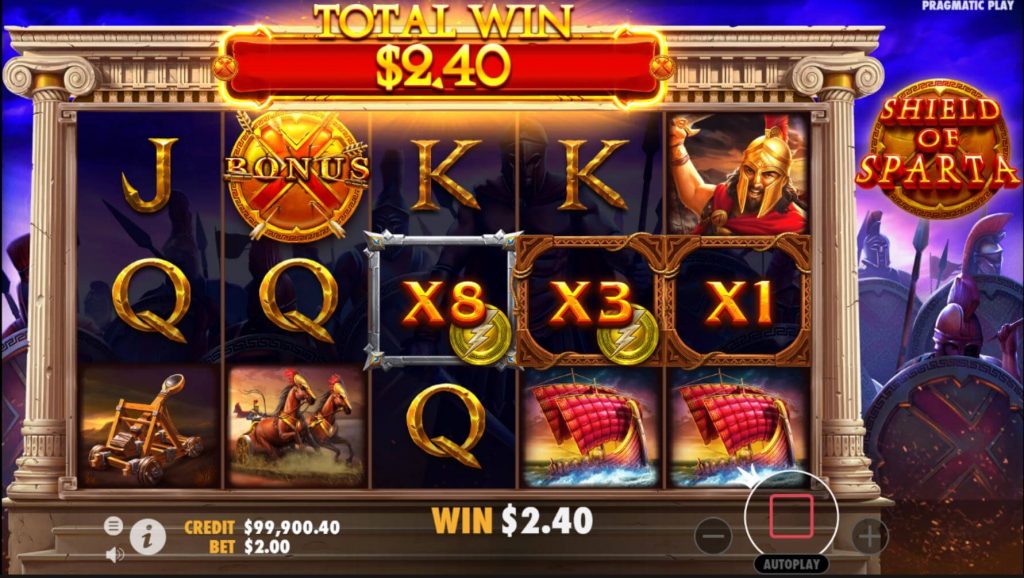 Sparta was very important in the history of ancient Greece but Shield of Sparta doesn’t live up to its name. There’s graphically little war going on. Shield of Sparta is a gaming set in an unimaginatively designed slot world.

The framed position and multiplier feature has some creativity to it, but it isn’t enough to make this online slot worth playing unfortunately. It looks like Pragmatic Play didn’t have a lot of dedication or resources when it came to developing this online game.

Still we would like to end with a positive note. Free spins were triggered frequently during testing. Hereby the low-thrills base game was interrupted enough to prevent it from getting boring.