It’s time to get rocking on this old school style slot machine. Red Tiger has come up with the perfect name, Rock’N’Lock – a stylistic representation of what life was like before we had all these modern inventions that make things complicated.

When you start playing the game, it will be like entering into an old school rock concert. With matching graphics and sounds that are sure to surprise. You’ll encounter a James Dean type while riding the palm-tree lined streets of LA. The smell of burgers sizzling on grills and coins piling into jukeboxes, fill the air as we imagine life in this Rock’N’Lock city.

But will this game have what it takes for you with its guitar-riffed action? Let’s go and find out! 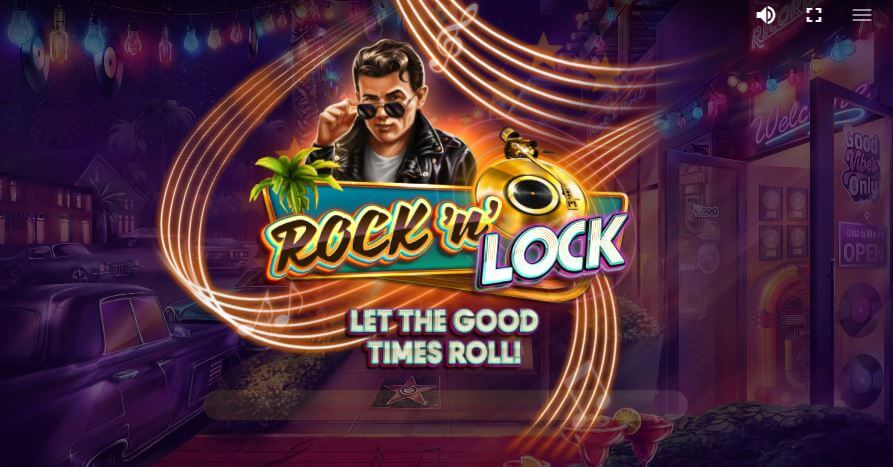 You can play Rock’N’Lock on any device accepting bets from 0.10 to 40 EUR/USD per spin.

This 5 reel, 4 row game has 25 paylines for you to win. The regular symbols pay from left-to right on adjacent reels. Furthermore Rock’N’Lock has a wild which can substitute for other regular symbols during gameplay.

This medium volatile online slot has a RTP of 95.96% which is below slots average. RTP stands for Return to Player and is the percentage of stakes the game returns to the players.The maximum win on Rock’N’Lock is 2,340x your total bet. The cash prizes are not going to be really high in this game. 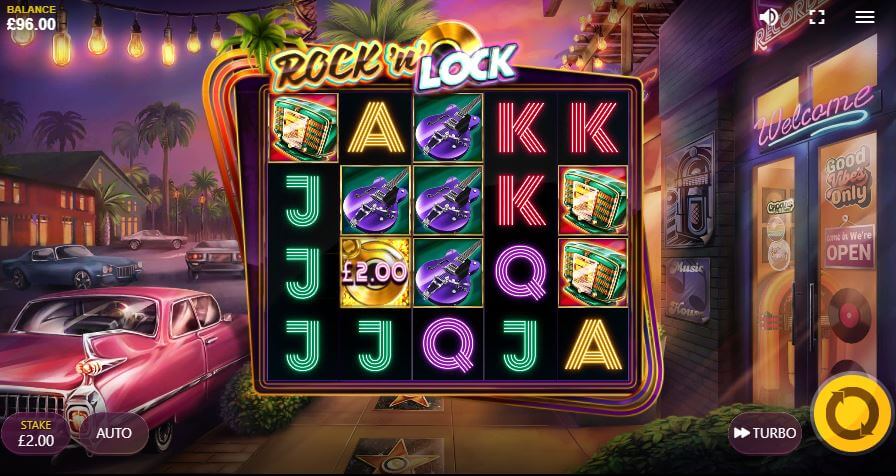 Gold and Platinum Record symbols can land everywhere on the reels. They do not directly contribute to winning lines but instead display multiples of your bet. Just as in reel life, Platinum is worth more than Gold. Gold Records pay 1 to 5x the stake. Platinum Records on the other hand have values of 7x, 10x, 12x, 15x, 20x, or 25x the bet.

This is different in the base game. The Gold and Platinum Records have a 1-5 number on the top of their left corner. This number represents how many spins will lock the reels before the records fall off the grid. 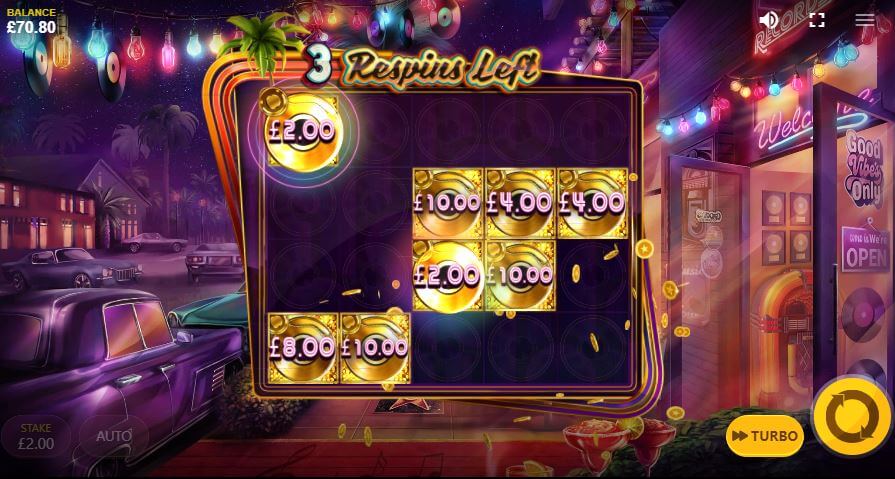 A minimum of 3 records have to land before the bonus feature starts. Respectively 3,4 or 5 free respins are awarded for 3,4 or 5 records. The amount of records you’ve triggered are locked during the entire bonus feature. With every new record that lands, the respins are reset back to their original amount. It is therefore the intention for you to collect as many records as possible. The higher the amount of records, the higher you can win!

Nice to mention that with every new record symbol landing on the grid, the value of these record(s) are added to the original ones. In a situation where there are multiple new records appearing on one spin, they do not improve each other’s values. When the Lock the Records Feature has come to an end, all the Gold and Platinum Records will be awarded. If, and let’s hope so, the entire grid is full of record symbols, the awarded amount is doubled!

The Rock’N’Lock game was alluring to play, but felt lacking in terms of features and prizes. The sights and sounds had a pleasant level of entertainment but not enough compared to other online slot games.

The bonus round is another straightforward hold ‘n win game with the goal of landing new records to reset and keep your spin count going. The only innovation here involves adding values from all record symbols on top, which was actually quite a neat touch.

We’ll be playing Rock’N’Lock for as long as it takes, but that doesn’t mean we need to look up this game again anytime soon. Too bad James Dean doesn’t have more influence on winning a nice amount of money!