Microgaming has released a couple of slots based on sports, such as Basketball Star, Rugby Star, and Football Star. The provider is taking players on tour to Mexico this time, deviating slightly from the theme of mainstream sports. Numero Uno is a perfect twist to Lucha Libre, a term used in Latin America to describe professional wrestling. Lovers of this particular sport will find the game interesting. Notably, the Numero Uno slot is stuffed with excellent features, including a Wild Showdown, Rolling Reels, Stacked Wilds, and even a Free Spins round with multipliers that increase your payout.

When you open the game, you can guess that the slot’s theme is all about wrestling. But unlike the Mexican Lucha Libre’s traditional human wrestlers, Microgaming put a twist by using dogs. So lace up; it’s going to be a long fight!

The slot reels are set against a wrestling ring, and you can see fans cheering and rejoicing in the background. Furthermore, the mariachi music in the background gets you fully immersed as you spin the reels. Read further in this review for more details about the slot.

Numero Uno isn’t an anyhow wrestling-themed slot, but one that takes on the Mexican wrestling culture where masks, high flying moves, and heavyweight are on display. Inspired by the Mexican rich wrestling tradition, Microgaming designed Numero Uno with a 5×3 grid layout and 243 ways to win. The game payout wins from left to right when you land 3 or more symbols, starting from the leftmost reels. You can begin to wrestle with a stake as little as 20c and can increase up to €120.

Visible on the reels are four different dog symbols and a chicken referee symbol. These are the high-paying symbols on the paytable with the Red Masked Dog, Numero Uno, delivering 250 times your bet when you land 5 of them on the reels. On the lower end of the paytable, you’ll find royal card symbols, such as A, J, K, and Q. There’s a Wild, represented by the Eagle symbol, which can replace standard symbols on the payline to award a win. Stack 40 or more wilds on reels 3, 4, and 5 to boost your winnings.

During this review, we couldn’t find any official information on the Return to Player percentage (RTP) or the volatility level. We recommend you to play the demo version before you start playing for real money. That way, you can learn the gameplay and gauge the RTP without risking your bankroll. From our tests with the demo version, it seems like a slot with high volatility that doesn’t provide meaningful wins too often; but when it does, you can see some massive wins. Though landing the free spins round is a bit challenging. 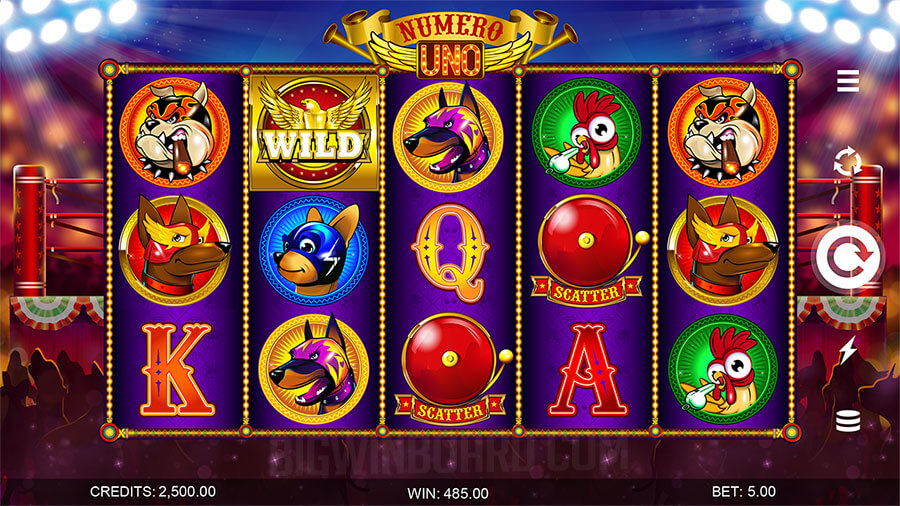 The Rolling Reels feature triggers after every winning combination. After every win, the winning symbols explode and are replaced by symbols falling from above, creating more winning chances. This feature is available both in the base game and Free Spins round.

This feature activates randomly in the Numero Uno slot game and can guarantee you a win. Players should note that the Rolling Reels are not active during this round. When this round triggers, Numero Uno fights an opponent and can turn reels 2, 3, or 4 into Wilds.

With 3, 4, or 5 scatters anywhere on the payline; players receive 12, 20, or 25 Free Spins, respectively. In this round, the bet and paylines are the same as the triggering spin.

A very lucrative feature of Free Spins is the addition of a 2x to 10x multiplier. With every Rolling Reels trigger, you receive an increased multiplier. So as long as you keep winning and the reels rolling, you can win bigger and bigger rewards. However, the multiplier resets at the beginning of a new free spin.

If you’re a fan of Mariachi music, then Numero Uno slot is an ideal choice. Microgaming has outdone itself with the engaging visuals and soundtrack. The free spins and the progressive win multiplier that leverages the Rolling Reels feature make the game worth trying out!