Mount M, an online slot from Swedish developer Play’n GO, is full of the Ice Age’s ancient enemies. Back into our past you’ll find yourself in a landscape frozen over millennia ago! You’ll be facing off against creatures that would otherwise guarantee extinction. You can take out their numbers quickly enough with weapons like spears or shoot them down before they get close enough to attack. Don’t let this easy victory lullaby get your fatigued mind because there are more than just beastly opponents waiting under these snowy surfaces.

The sound and visual team at Play’n GO have created a short yet intriguing clip to introduce Mount M, where players glimpse cave paintings, a mammoth-shaped mountain as well as an ancient burning brazier. The didgeridoo can be heard from time to time amongst other effects – all while fast moving clouds fill up the background scenery. This cold landscape with snow covered mountain sides leads you on your quest! 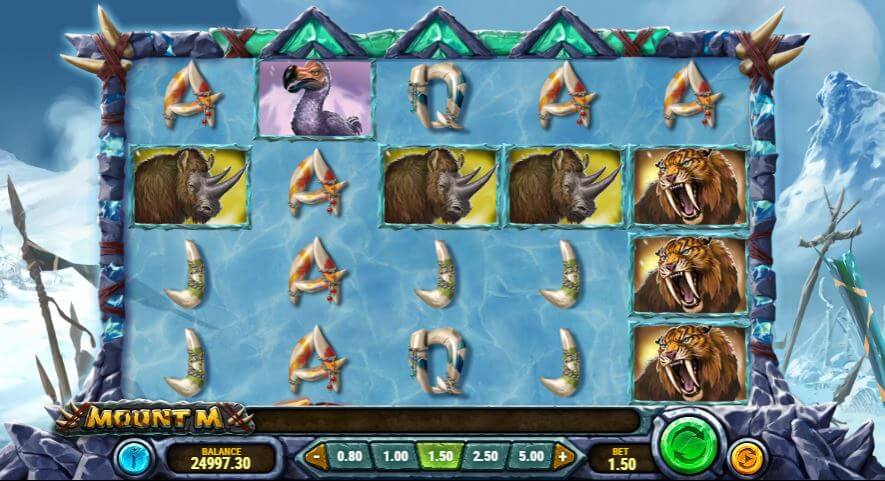 Mount M is a land of opportunity, where the most daring and lucky ones will be able to win big! Five Reels and four rows in the beginning, can grow up to eight rows high at maximum size. There are 1,024 to 8,192 different ways for your guaranteed success. You can use your tablet, mobile phone or desktop computer for entering this chilly era, selecting a betting range from 0.10 to 100 EUR/USD per spin.

The RTP is 96.25% which is above slots average. From a payouts perspective, the maximum win is 13,000x your total bet.

The game offers nine regular paying symbols in the form of J-A royals and five ancient animals. You can encounter dodos, hyena-like creatures, woolly rhinos, sabre tooth tigers with their thick fur coats and giant mammoths. When three matching symbols land in your base game from left to right you’ll win.

A five-of-a-kind win is worth 0.3x for the card symbols and 0.5-2x for the ancient animals. Finally there’s a golden wild symbol which substitutes for any other symbol on the three middle reels. This increases your possibility for a big win!

The wild symbol also triggers other features like ‘The Shatter Respin’ or the ‘Evolution Free Spins’.

Let’s take a look at the different features which are hidden in this cold and icy slot.

The outline that randomly appears around the middle three reels on base game spins can be the start for some exciting wins! If a wild symbol lands while they are highlighted like this, the Shatter Respin feature is for you. The respin randomly adds 1, 2, 3 or 4 rows over the middle three reels, offering you up to 8,192 ways to win.

Every 3-symbol row added to the grid will transform one of the premium symbols into the mammoth symbol. In case all four rows are added, only mammoth and card symbols will be presented. When the respin has come to an end, the grid resets for your next ‘normal’ spin.

The more scatter symbols appear on your board, the higher your chances.

Even when the bonus feature is active, landing 2, 3, 4 or 5 scatters will retrigger additional free spins with a maximum of 10.

The bonus game starts with the normal 5×4 grid. Your goal is to unlock the four extra rows which are hidden in the game. You can do this by gathering the golden orbs from the wild symbols. You need a certain number of orbs (5, 10, 14 and 17) to unlock the extra rows. By unlocking each row, the lowest premium symbol is transformed into the highest paying mammoth. Everytime the reels expand, 1 extra free spin is awarded. 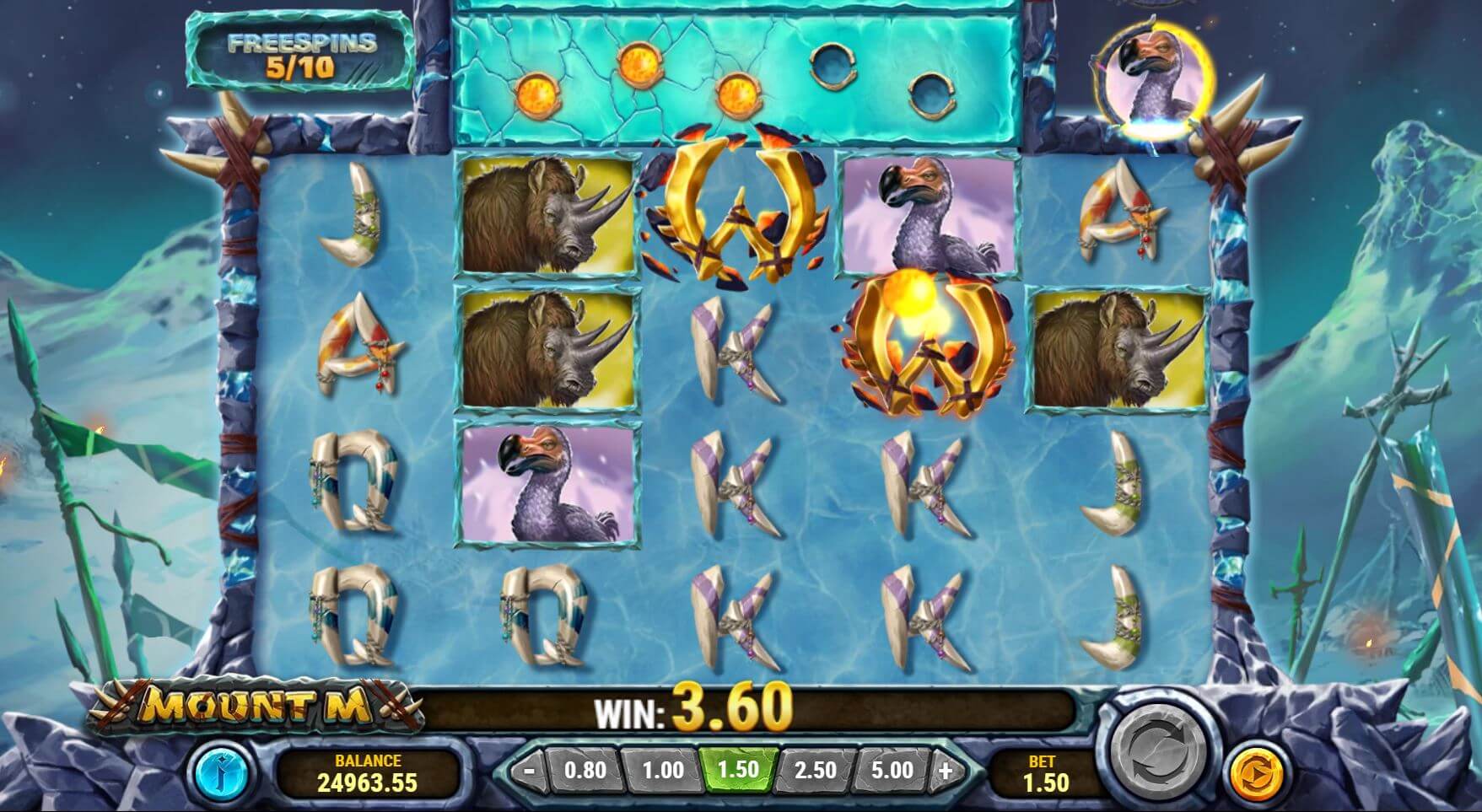 The ice age has been captured perfectly in Play’n Go’s visual theme and the soundtrack fits like a glove too. Mount M is suspenseful and has ample win potential, although the base can be too monotone at times. The Free Spins are rather volatile so you might not end up on Mount M peak after every round. Brave the cold and go on your personal quest. Only the vicious animals may stop you!