Netent has created some amazing games to play, but perhaps none more so than Gonzo’s Quest. It tells the tale of the famous conquistador Gonzalo Pizzaro and his journey to find the lost city of El Dorado. From the moment that you load this slot up, it provides you with amazing visuals and stellar gameplay. And this is all complete with Gonzo watching on from the side-lines. It’s got a very Peruvian feel to it, as that’s where the explorer went in search of the lost city. And furthermore, it contains a few entertaining special features to keep things thoroughly compelling. For example, it’s got a wild symbol to accompany standard base gameplay. And this one will substitute for any other icon upon the reels, helping you to create winning combinations. Free Falls are also an added perk, which work in the same way as freespins, and the jungle sounds in the background all add to the atmosphere of the game. All in all, it’s a truly thrilling option to access from Netent. 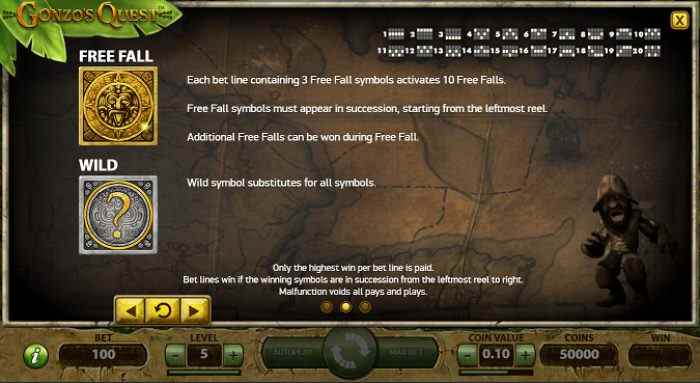 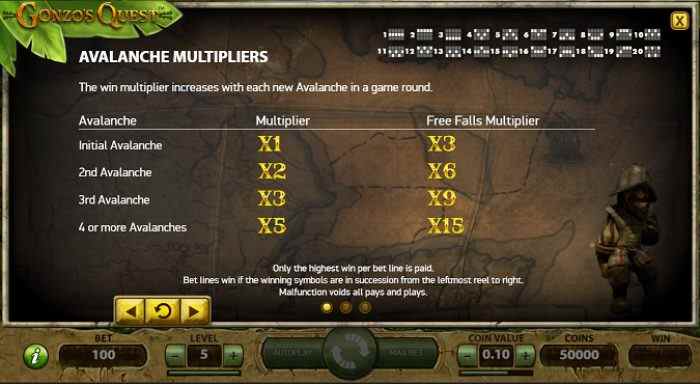 The adventure side of this slot game is definitely on full display. It has a great setup, layout and base gameplay for you to enjoy. And the fun doesn’t stop there either, because it also plays host to several different speciality features. First of all, you’ll get to see a wild icon come into play. This is the tile with the question mark on it. As a wild symbol, this one is able to substitute for all other icons upon the reels, helping you to create winning combinations. Therefore, it can be quite helpful in boosting your chances.

The game also plays host to a free spins like round. Obviously, because the reels cascade instead of falling, the freespins in this game are known as Free Falls. Each bet line that contains three Free Falls icons (the gold tile), will trigger 10 Free Falls. Free Fall symbols need to appear in succession, starting from the leftmost reel. So, in that instance, they’re not scatter symbols. Additional Free Falls can be won while the round is in-play too. And as well as these features, there’s also the Avalanche Multiplier function in Gonzo’s Quest too. Every time that you create one or more winning combinations in the game, the icons participating in it will explode and disappear. This leaves room for new icons to fall into view and potentially create more wins. This is known as an Avalanche. And for every Avalanche that occurs, the win multiplier value increases. It has a single multiplier on the initial Avalanche, and then increases to times two, times three and times five for four or more Avalanches. In the freespins round, these go in the succession of times three, times six, times nine and finally, times 15.