The Golden Gorgon slot is a 5-reel, 25-payline game from Yggdrasil Gaming in which you fight the Ancient Greek mythological creature Medusa and her sisters as you make some profit. Boasting an array of new bonus features that will grab your attention, the Golden Gorgon slot will undoubtedly be among the popular slots such as Book of Dead, Gonzo’s Quest and Starburst. In this detailed Golden Gorgon review, you’ll learn all you need to know about this tumultuous ancient tale.

With an atmosphere set on a visually appealing grid, Golden Gorgon provides players 5 reels, 3 rows, and 25 paylines. Since Yggdrasil likes to keep things simple, all you have to do to make a winning combination is to land 3 to 5 matching symbols on a payline from left to right, starting on reel 1. 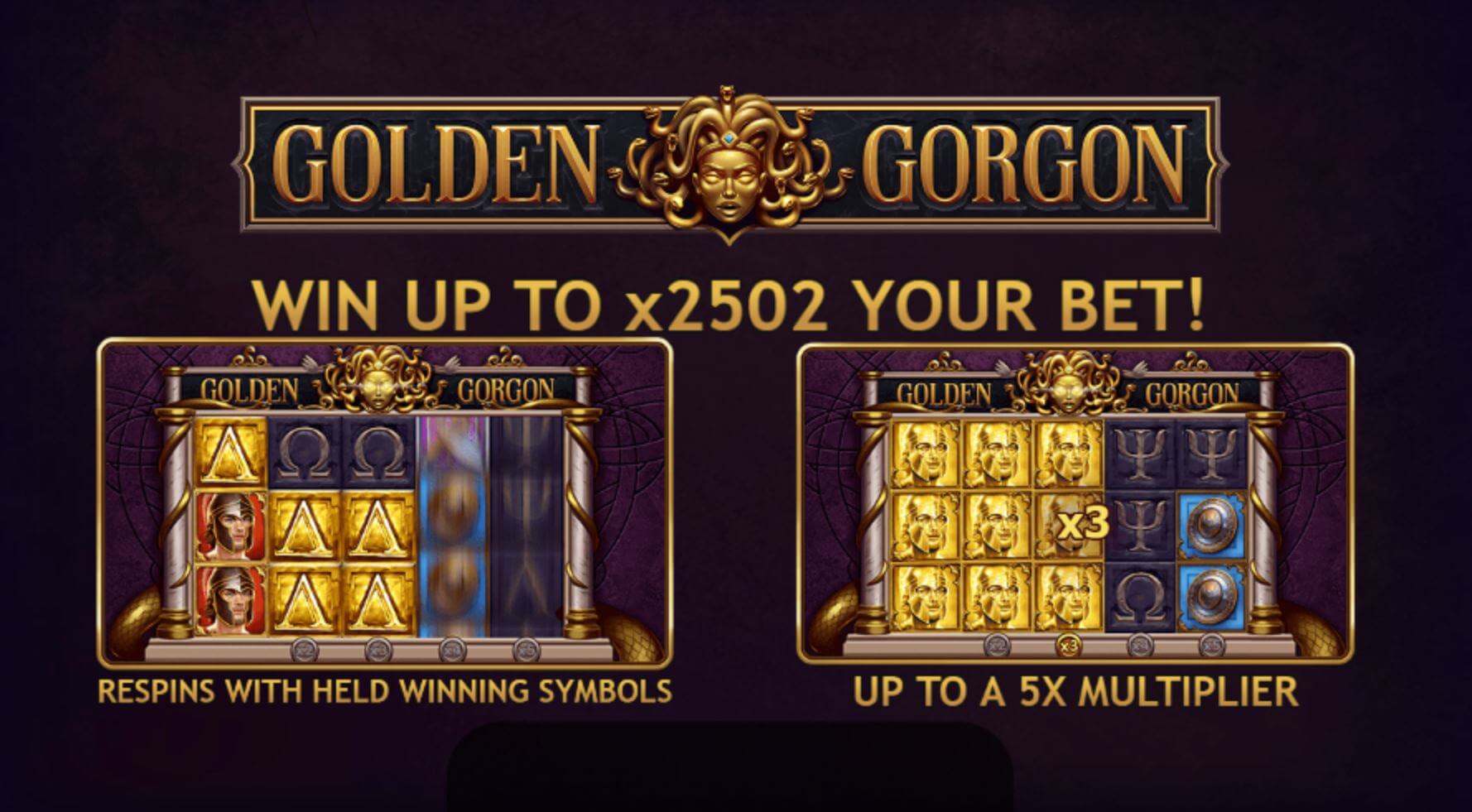 Although it’s not Yggdrasil’s most remarkable work aesthetically, Golden Gorgon’s visual style is still quite appealing to the eye. The purple patterned backdrop with columned reels and a touch of golden serpents complement the theme nicely. The game’s soundtrack is quite catchy, too, though it could use a slight improvement.

As for the bet size, you can make bets as low as €0.25, and the max bet is set to €400, and you can set your bet by clicking the + and – buttons next to the Coin Value box. The payouts you can receive with your current stake are also displayed so that you can make adjustments depending on what you’re aiming for. 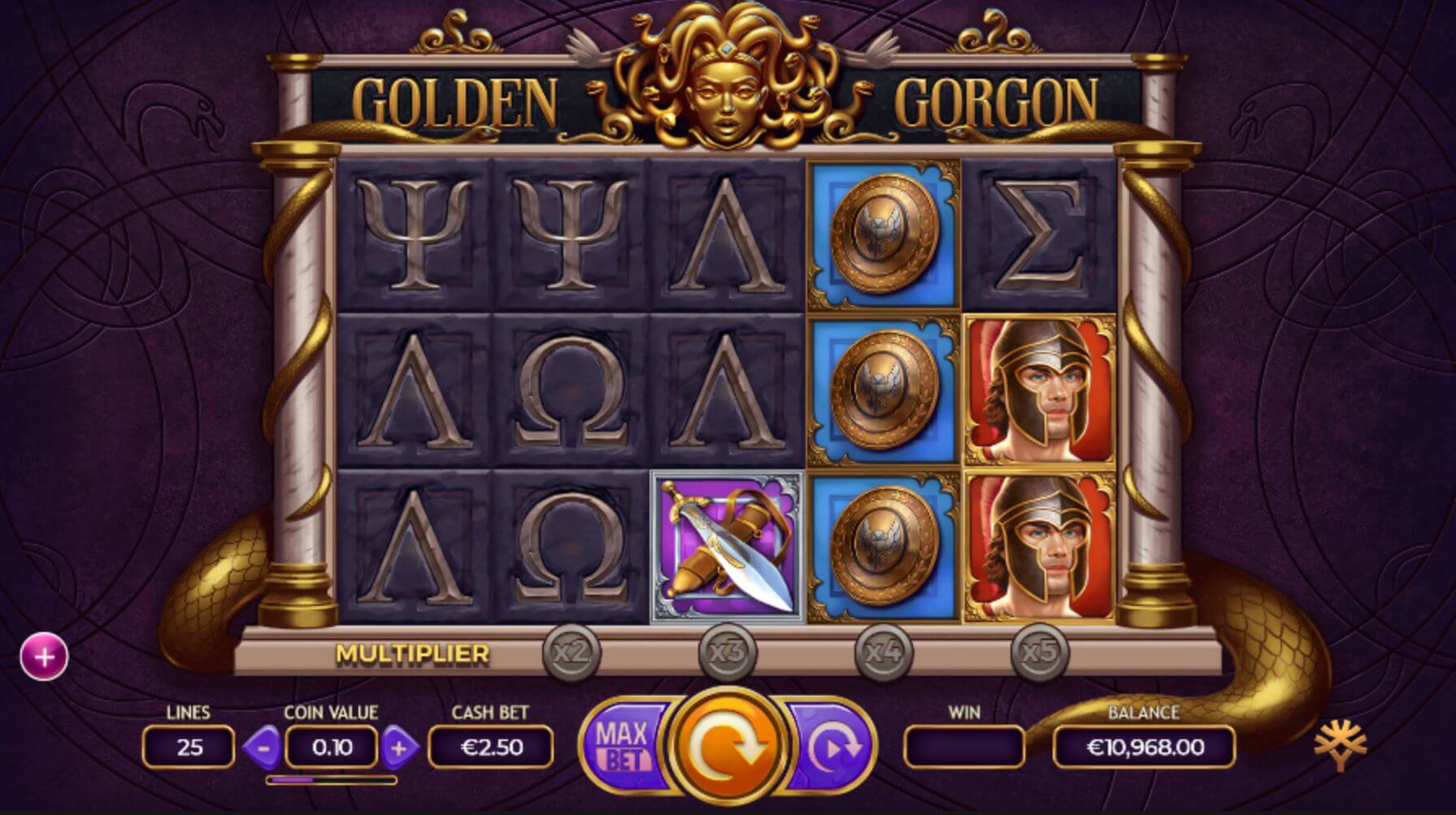 Regarding your potential earnings, the RTP for the Golden Gorgon slot is set around an average of 96%. Still, the slot has a lot of volatility, so be careful with your stakes. The hit frequency rate is around 12%, meaning you’ll hit a winner once every 8 spins on average. The max win you can expect from a single spin is 2,502 times your current stake. Continue reading to learn more about the Golden Gorgon slot features.

You’ll trigger the Golden Gaze bonus if you land three, four, or five matching symbols from left to right on a payline. The Greek Gorgon will then fix her gaze on the winning symbols, immediately turning them into gold and immobilizing them. Then, all remaining symbols on the grid will spin one more time. 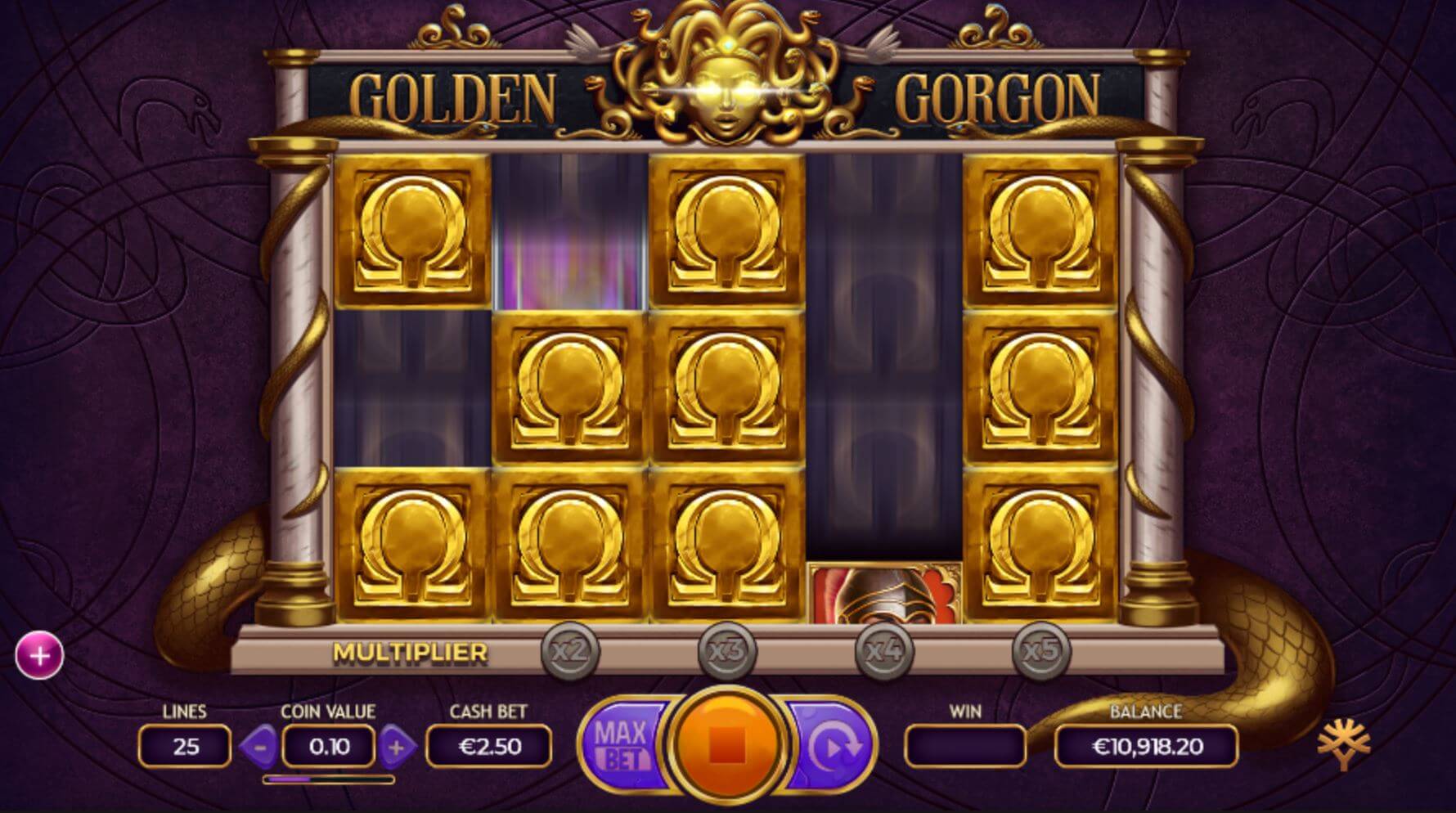 If a matching symbol lands to enhance your position, the symbol will stay on the grid and trigger another respin. You’ll keep getting these respins provided that you keep on landing combos. Once you get no matching symbols, a massive payoff that takes into account all of the retained symbols will occur. A happy ending indeed!

You’ll trigger the Multipliers Feature once you manage to fill all of the symbols in any column on your grid during the Golden Gaze feature. The multiplier’s value is equal to the number of matching symbols you land on the columns.

For example, if you manage to fill reels 1 and 2 with the identical locked symbols, a 2x multiplier will be activated. Likewise, filling 3, 4, or 5 reels will result in 3x, 4x, or 5x multipliers, respectively, holding the potential for some pretty mouth-watering prizes.

Finally, remember that the multipliers feature will trigger only if the columns with filled symbols are adjacent. This means that if you had reels 1, 2, and 4, but not reel 3, you would only be eligible for a 2x multiplier.

All in all, we can conclude that Yggdrasil’s Golden Gorgon is a promising slot and is certainly worth a shot. It provides each player ways to increase the chance of hitting the maximum win, which is often avoided by the developers. Keep in mind that this title is quite new, so it holds many surprises for players used to traditional 5-reel video slots like the Book of Dead.

While the base game is somewhat average, the overall gameplay can be fun and exciting, thanks to its bonus features. Big money is certainly at the respins you get. Once a respin round starts, you get a chance to land another matching symbol. Since all new matching symbols are here to stay, you have the opportunity to get unlimited respins with the probability of getting a multiplier on each one. So, Golden Goegon is as generous as it gets.

To summarize, the Golden Gorgon slot offers more than most online coin machine lovers ask for. If you’re a fan of unconventional online coin machines that can fill your pockets in minutes, the right choice is in front of you. We recommend you to find a casino that offers free spins on Golden Gorgon as part of its welcome bonus and make a qualifying deposit to see if it’s the right title for you.