Dio Killing the Dragon is Play’n GO’s new branded slot based on the heavy metal band and front singer ‘Dio’. Two former members of Black Sabbath, Ronnie James Dio and Vinny Appice formed this group in 1982. Listening to some classic heavy metal songs along with dragons, monsters, castles, wolves, and weapons, players get features like locking wilds in the base game and free spins with several possible modifiers in the bonus game.

The band’s music has previously appeared in another iGaming video game, as they performed the soundtrack to Holy Diver Megaways by Big Time Gaming in 2019.

If you like horror graphics and heavy metal, then this online slot could be a perfect game for you to play! 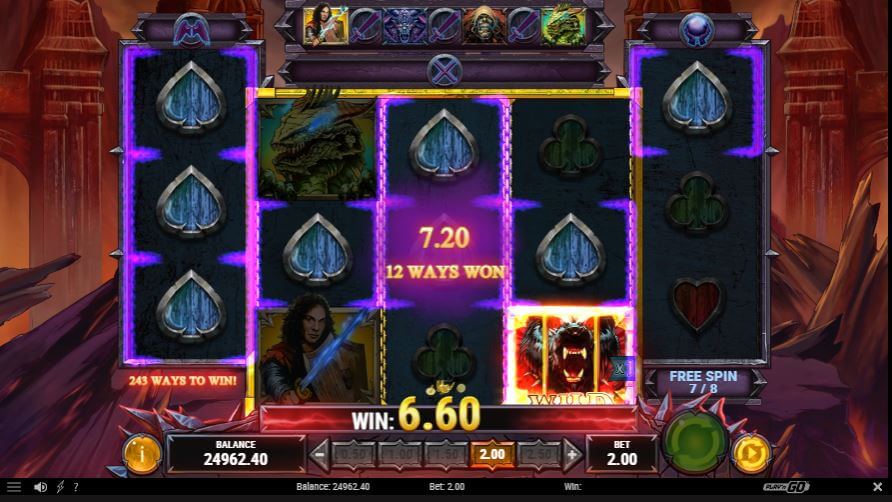 Dio Killing the Dragon is played on an interactive 5-reel game grid, with each reel holding three symbols. This provides 243 ways to win! The first and fifth reel are slightly raised, which may only affect your game play in an aesthetic way.

You can place bets from 0.10 up to USD/EUR 100 per spin. Dio Killing the Dragon is a high volatile slot with a variety of RTP percentages of 84.25 – 96.25%. We therefore advise you to check these percentages before playing at an online casino. The maximum win is set on a neat 15,000x the bet.

The ‘Dio Killing the Dragon’ win is given to those who can get three to five matching symbols on consecutive reels, starting on the leftmost side of the grid. The low pays are card symbols: clubs, spades, hearts, and diamonds. Landing a five-of-a-kind pays 0.3-0.4x the bet. The premium symbols are high paying symbols. There are three monsters and a heroic Dio who’ll pay 0.5-1x the bet for a five-of-a-kind.

The wild wolf symbols can appear on all reels to substitute for any symbol except the scatter. They award you with 2x times the stake for a five-of-a-kind.

Not only does the bonus game give you an opportunity to expand your wins. In the base game and only in the base game you’ll find the following feature:

Lock up the wolves Feature

You’ll trigger the Free Spins Feature when you land at least 3 scatter symbols on the reels.

It’s possible that a special symbol lands on the 5th reel in order to reward you with 2 extra free spins. When this happens, one of three modifiers will be triggered:

Fallen Angel: The wild is added at the top of reel 1 and moves down one position on each following free spin until it falls off the grid.

Symbol Upgrade: The lowest value monster symbol is upgraded to Dio’s heroic symbol. You can defeat the dragon when all monsters are upgraded to Gio’s magical power!

Wild Multiplier: The win multiplier of one sticky wild is increased by 1 up to five times. 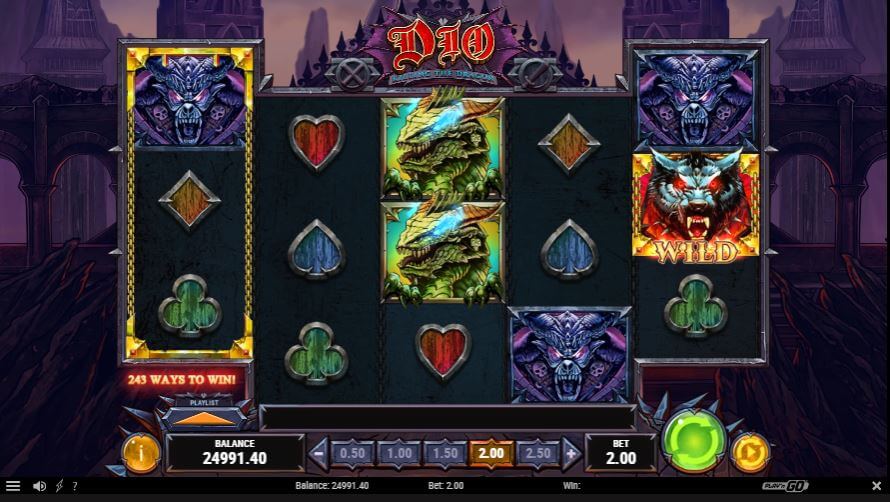 The base game is a warm-up act with occasional locking respin highlights from the Lock Up The Wolves feature. The bonus game is supposed to be the main concert but in our opinion the game is lacking some excitement. As with most music-themed slots it will be more appealing to fans of the band. Listening to their song: ‘Don’t Talk to Strangers’, the game will bring the fans to a dark realm where a dragon has to be beaten. The Play’n GO designers could have worked this out much more energetically.

On the other hand the maximum win is clocking in at 15,000x the bet! Which is a solid number. So if you’re totally in for a world of monsters, listening to your favorite band and defeating the dragon, forget our negative input and rock your way into this metal online slot!