Chip Spin is the latest addition to the Relax Gaming slots catalogue. The game brings players to… you guessed it right. Las Vegas of course. Logically, the slot has a casino theme.

Like we’re used to from the Relax Gaming team, Chip Spin is also designed very formidable. The first thing that catches your attention is the big welcoming statement “Welcome to Fabulous Las Vegas!” in front along with all sorts of things happening behind the playing grind such as Cirque Du Soleil productions and the iconic Luxor Las Vegas Pyramid. In short, the visuals in Chip Spin are truly mesmerizing along with a relaxing soundtrack running in the background completing the overall casino experience.

Before running into the bonus feature details of Chip Spin, let’s have a closer look at the general characteristics of this new Relax Gaming video slot. The game features a 5 by 5 playing grid with a so-called ‘Connected Ways’ win mechanism with 259 pay lines. A connected way win is formed by three or more equal symbols landing in adjoining reels and one row above or below, or in the same row clearly. Betting starts from €0,10 per spin up to a maximum of €40. The theoretical Return to Player percentage stands at a solid 96,36%. Furthermore, the maximum possible win is 25.000 times the bet making the game highly volatile. Juicy stats, don’t you think? Whilst the base game is fairly simple and without extra features, Relax Gaming definitely makes up for this in the bonus game and free spins feature. Let’s kick off with the Chip Spin Bonus Game. This one can be triggered during the base game by landing 5 or more green, purple or black chips. During the bonus game you’ll be given one life and chips will be sticky. Players will be able to collect more lives by landing a chip with a heart symbol dice added next to it. When no chip lands during the bonus game spin, 1 life will be lost. The bonus game ends when no lives are left. This bonus game is also known as ‘Hold-and-Win’-feature which has been used in many slots prior, for example in Money Train and also in Floating Dragon by Pragmatic Play. During the Chip Spin Bonus Game each chip will have different functions. The green chips award a coin value. Purple chips are called ‘snipers’ and will double the coin value of 1, 2 or 3 random green chips. Lastly, the black chip acts as a collector. Meaning it will collect the value of all green chips you’ve landed during the bonus game. Also worth noting is that both snipers and collector chips will appear with small chips on them. The amount of mini chips determines how many times they can be used. For example, if you land a black chip with three mini chips, the collector will be activated three times. 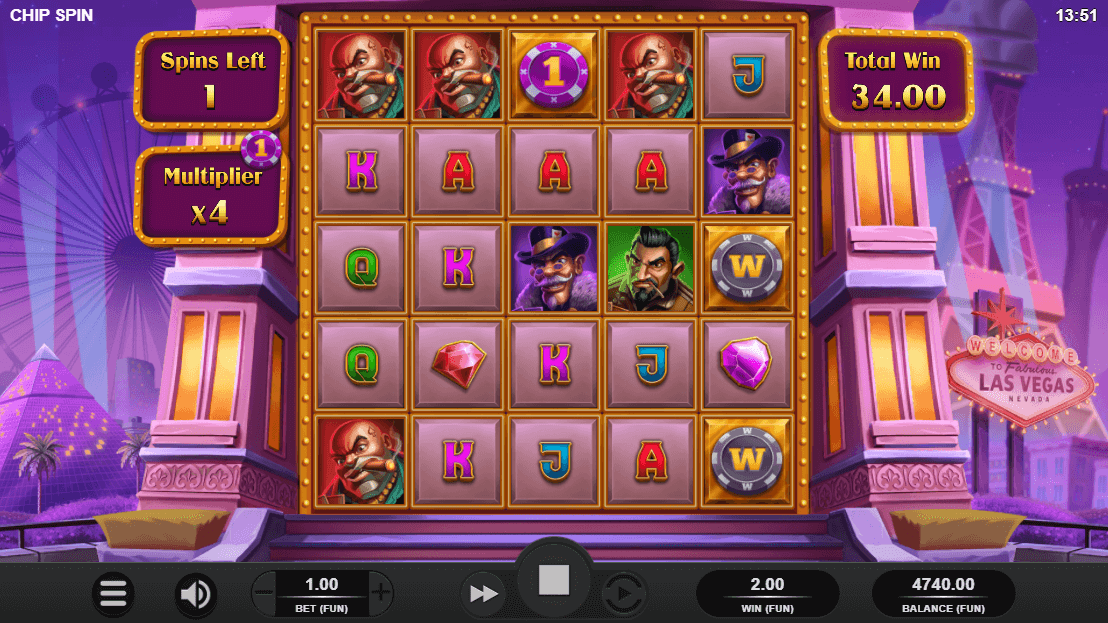 Such as the Chip Spin Bonus Game, the Free Spins Bonus Game also features three different casino chips with each having their own function. The green chip will reward an extra free spin. The purple chip will increase the win multiplier by +1 each time it lands. Finally, the black chip will act as a sticky wild during the free spins you have left. Worth mentioning is that black chips cannot land on the first reel.

Chip Spin definitely qualifies as an action-packed video slot. This is more true considering the high volatility which can deliver players wins of up to 25.000 times their stake. Especially the bonus features caught our attention. Landing some snipers and collectors during the Bonus Game can definitely result in tremendous wins. This will likely attract slot players. No doubt. We are a bit disappointed in the base game though. We would have appreciated some more action in the base game to finish it off. 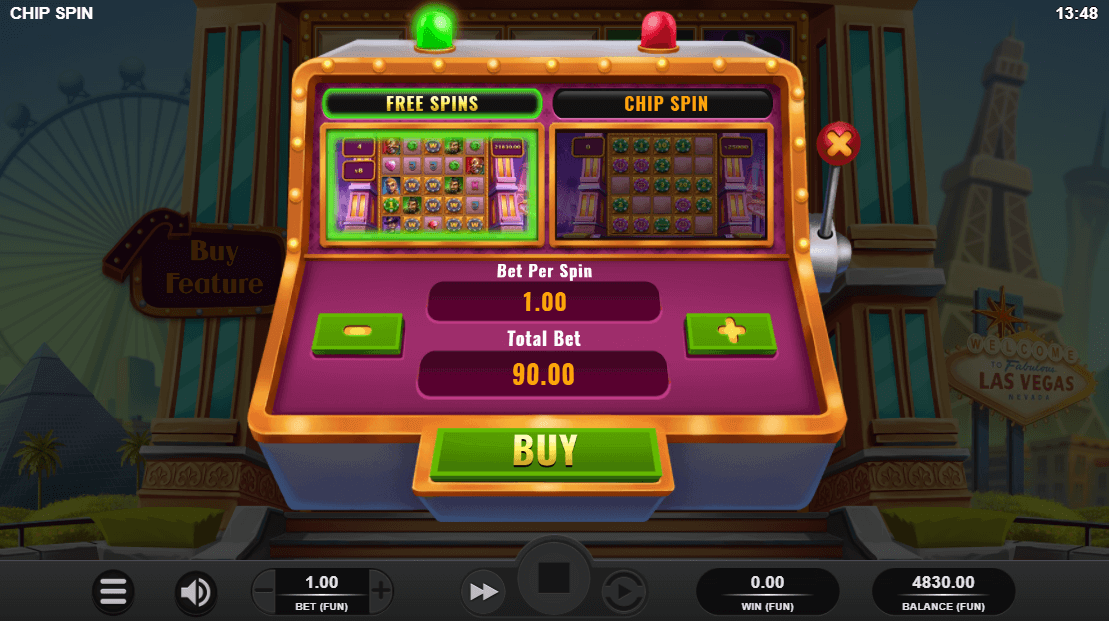 Players have the option to break through the base game boredom by using the Buy Feature option and selecting either Bonus Feature or Free Spins Feature. Costs? 90 times stake for the Free Spins Bonus and 70 times for the Bonus Game. Having said that, we’re sure Chip Spin will be well received by players around the globe. Kudos to the Relax Gaming team for developing another great slot game!