The Swedish company Play ‘n GO has become famous for creating some of today’s most popular slots. Their latest slot, Canine Carnage, is set in a futuristic setting, proving that dystopian futures are still hot.

Canine Carnage is an action-packed, thrill ride through the canine world where your favorite four legged friends have taken over! Listening to techno music while cruising around in monstrous vehicles. How would you like to control a world where cyborg dogs and futuristic cars battle for survival? There’s only one solution – Come with us and see what’s happening. 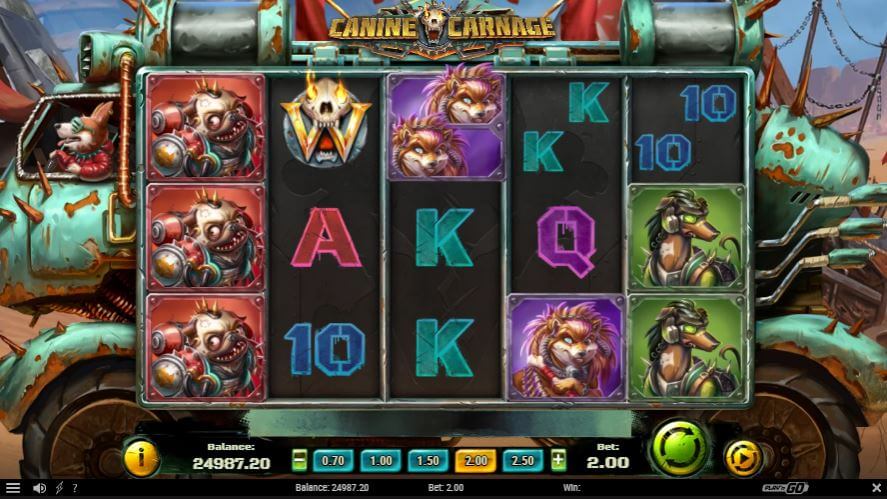 The game of Canine Carnage has a 5-reel, 3 row grid where the ways to win start at 243 but can expand to 248,832 when symbols split.
Canine Carnage is a medium volatile slot. Playable on any device where you can place bets from 0.10 up to EUR/USD 100 per spin. Matching symbols landing from the left to the right side of this slot machine will win you money.

The Return to Player (RTP) is 96.20% which is slightly above average. The maximum win is 3,000x the stake. Not very high but in some decent range?

The flaming-eyed skull is the wild symbol in Canine Carnage. This wild symbol can appear on all five reels. Wilds substitute for any pay symbol and are worth up to 5 times the stake when found in a five wild symbol winning combo.

Canine Carnage isn’t a game with numerous bonus features. Yet it is useful to tell how every feature is working.

Sometimes wilds are referred to splitter wilds in the game. When wilds land, they split certain symbols, to the right of them, in the same row into two. Not all symbols can be split. Royals, characters, golden bones, and wilds can but collectors, scatters, or multipliers can’t be split. Sometimes 1-3 wilds will be randomly added to the grid.

Multiplier symbols can land on any spin or randomly added to the field. There’s a x2, x3 or x5 symbol. When the multiplier is in view, your win will automatically be multiplied by the concerning number. If more than one multiplier is present, the values are added together.

The Golden Bones can be found anywhere on the grid and will display a cash prize when they do. Their maximum value is 5x the bet.
3-6 Golden Bones can also be added randomly to the grid. When the pitbull ( collector symbol ) and golden bones land together, their values are awarded to the player.

The bonus game will be triggered when at least 3 flaming petrol can scatters hit the grid. When this happens, 6 Bone Spins are awarded to you.
During these Bone Spins no other regular symbols are present.
Golden Bones not only award their values instantaneously but also increase the Cash Pot above the reels when they land. When the collector symbol lands, the Cash Pot will be rewarded.

On each spin 1-3 features can be active. For example: an addition of 3-6 golden bones to the grid, multiplier symbols and splitting wilds all in one spin!
Multipliers who appear are accumulated throughout the entire feature. 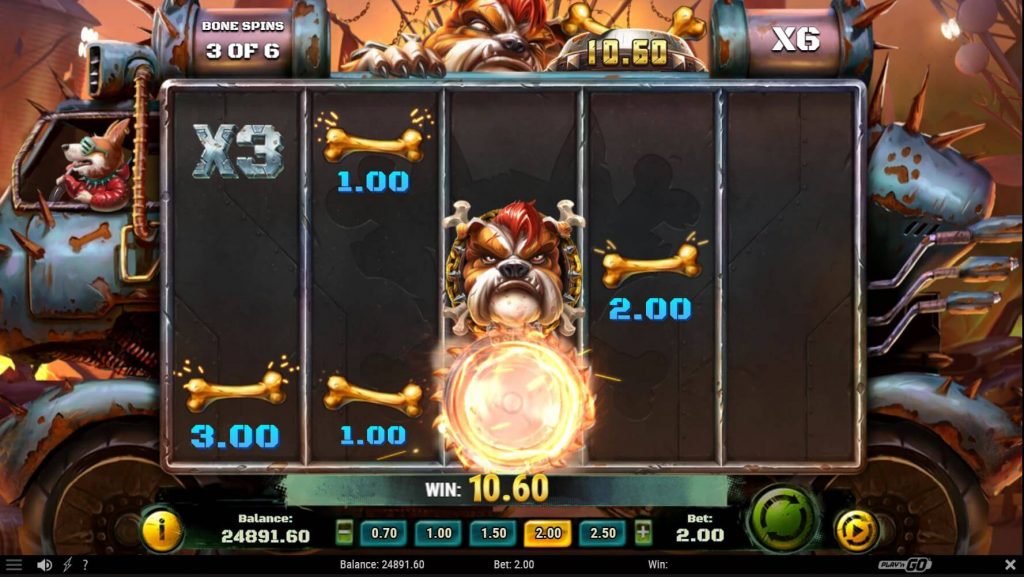 During the Bone Spins, things can be confusing. There’s so much happening in one spin that it’s not always easy to understand where the numbers are coming from.
A positive note is that the graphics are really outstanding. There must be a lot of work in it.

The base game has a steady, yet challenging pace to it. There are plenty of Golden Bones collects and frequent symbol slicing challenges that will keep you on your toes. The free spins are quite inventive as well. The outstanding audio-visuals really save the day but what downgraded this online slot is the maximum win of 3,000x the stake. Play’n GO had to really think this through before releasing this slot.

In Summary, it was a nice game to play. Never thought that dystopian doggies are fun to play with!