We’re all thoroughly aware of the presence of Ancient Egypt in history. The country was one of the biggest powers in the world at one point. And it’s been brought to life in many different online slot games. Book of Ra Deluxe 6 is another one to add to this collection, although it’s a little bit different. You see, it works with a total of six reels, rather than the more usual five reels we’re used to see from Greentube. This makes it more of a unique game to play, and it’s still full of intriguing features at the same time. Novomatic has also made sure to incorporate some impressive enough graphics in the game too, so it provides both a visual treat and a stunning round of gameplay. And amongst the scarab beetles, sarcophagi and Egyptian statues, there’s also the actual Book of Ra too. This one works as both a scatter and a wild within the game, thereby offering up stronger opportunities to form winning combinations. Let’s find out what else this slot contains and is able to provide to its players. 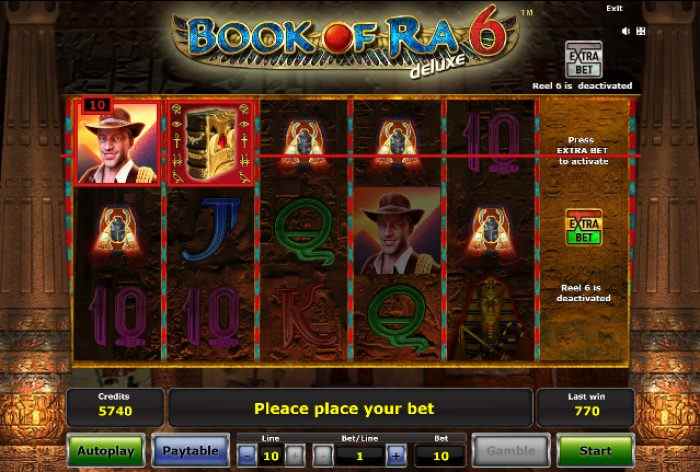 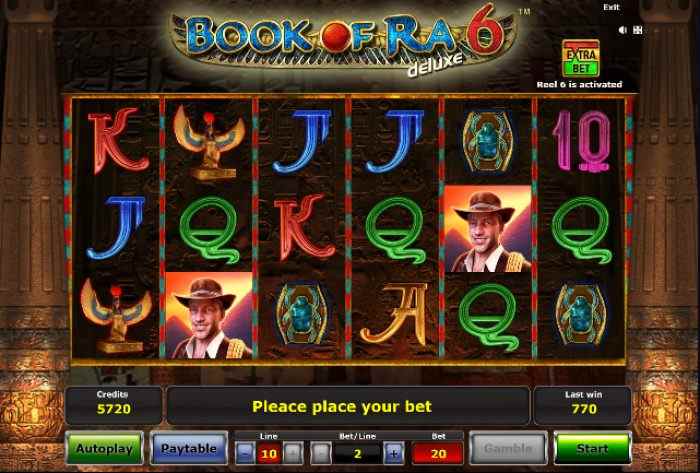 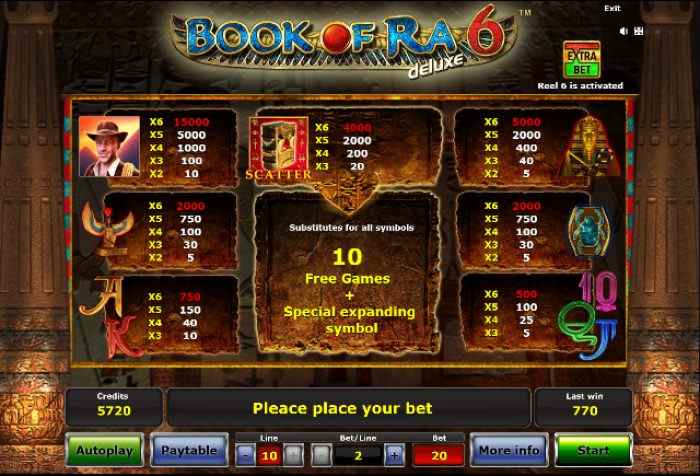 Book of Ra Deluxe 6 is not the first incarnation of this game to be made available. However, it’s definitely the only one with six reels that can be brought into play. This means that you don’t have to play it with all six reels. But, if you do, your overall bet is effectively doubled. And it’s the ancient book itself that works as a wild icon in this game. Therefore, wherever it shows up, it will substitute for all other icons upon the reels, helping you to create winning combinations. It is also able to provide a maximum pay-out of a staggering 2,000,000 coins. Being a wild is not its only function though.

The Book of Ra symbol also works as a scatter and bonus feature round trigger. And what is the bonus feature round? Freespins, of course. If you bring three or more of the scatter wild into view anywhere, you’ll receive a total of 10 freespins. And before the round can begin, a special expanding symbol will be chosen. This is not something that you have the power over, so the game picks this icon randomly. However, whenever this symbol then appears during the freespins round, it will expand to cover the entire column that it’s on. This also provides additional opportunities to create more wins.

Aside from this, the only other addition to Book of Ra Deluxe 6 is the gamble round. This automatically activates whenever you create a win during the base game. And if you choose to play it, you need to try and guess the colour of a face down playing card. Red or black are your colour choices, and if you get this correct, your winnings from the triggering round will receive a double multiplier. An incorrect guess sees those same winnings lost.