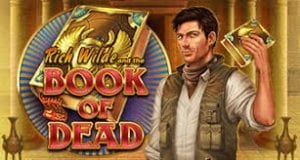 Ancient Egypt is a great theme for an online slot game to have. And while some developers incorporate it quite nicely, others not so much. This Play’n Go offering, Book of Dead is one of the former. Utilising some amazing graphics, the visual appeal of this game will be the first thing to hit you. Not only that, but you’ll see that gameplay flows very smoothly and entertains to the highest level. There’s even a very nice piece of soundtrack music in it to fit the overall theme too. But that’s not all, because you’re able to trigger one or two special features while playing it. For example, the actual book of the dead works as a scatter icon, thereby providing a pay-out from wherever it shows up. And three or more of these activate 10 free spins. A special expanding symbol will also come into play during freespins to help you win more! And the book is also a wild icon throughout the game. What could be better than visiting Egypt and coming away with one of its most prized artefacts? 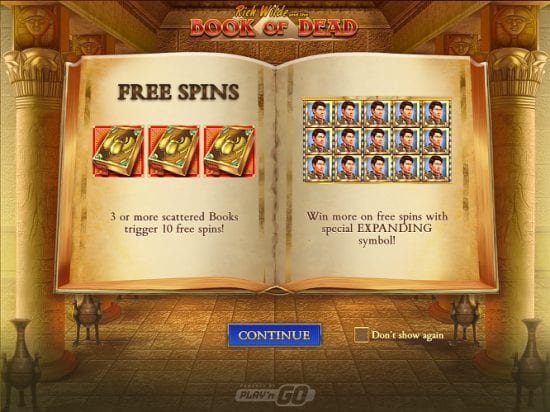 Book of Dead definitely incorporates its theme very well, right down to the soundtrack. It’s very clear that Play’n Go wanted to provide an authentic offering with this one. The graphics that the developer has chosen to add to it bring a very visually appealing offering to the game. And you’ll find that the highest standard win during gameplay comes from the symbol of Rich Wilde. However, alongside this icon, there is the book of the dead symbol too. This works as bother a wild and a scatter. Its former function is to substitute for any other symbol upon the reels, helping you to create winning combinations. And five of this one on a winning bet line will provide a maximum pay-out of 200 times your wager. So, you can see how helpful this icon can be.

The freespins round of this slot game will trigger whenever three of the book of dead icon show up anywhere. This is due to it working as both a wild and a scatter at the same time. There are 10 of these on offer to you, and the round also has a secondary perk. A special expanding symbol will come into play during it. This is randomly chosen before the freespins feature begins. Once it appears on a reel, it will expand to cover the entire column, thereby giving the strong possibility of extra wins. Symbols can appear anywhere on an active line to win! There aren’t any additional bonus features for you to activate or play through in Dead or Alive. It’s the base game, scatter and wild icon, and freespins feature only.