In Bison Rising, Blueprint Gaming brings us on a journey through the Wild West to meet the uncrowned king of the western plains, the bison. If this slot seems familiar, you’re not wrong. It is so near identical to its forerunner Buffalo Rising Megaways that it is hard to tell the difference. This time around, Blueprint Gaming has at least picked the correct majestic bovine as the label for their Wild West-inspired game. The buffalo from the previous game belongs in Africa and Asia, while the bison is the true legend of America.

Bison Rising Megaways is a visually pleasing online slot with a lovely prairie background and floating clouds. The symbols are big and easily distinguishable from each other, designed in a decent cartoon style. The sound effects could use some work, but on the whole, this is a highly enjoyable slot. 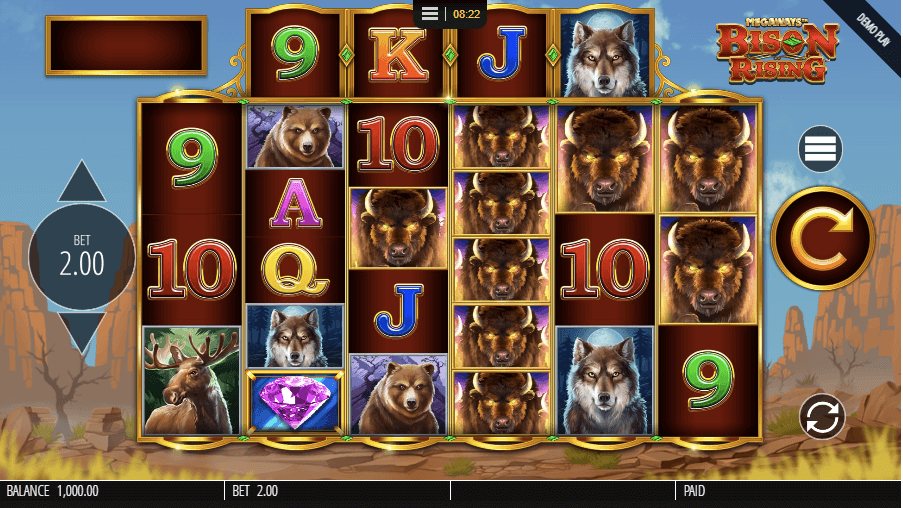 As a slot of the megaways variety, Bison Rising has a lot going on both in features and layout. You play on a dynamic grid with six reels and 2-7 rows, and as many as 117,649 pay lines. The features include a free spins bonus game with the Unlimited Win Multiplier, a mystery symbol, and a buy bonus function that guarantees you a bonus round. The game also uses cascading wins meaning Bison Rising Megaways is a stampede of wins for the lucky player.

With so many ways to win big, the slot naturally has a high volatility rating, with an RTP coming in at a reasonably decent 96.50%. The betting range is decent as well, starting at 0.10 up to 10 EUR/USD.

While it is possible to cash in good wins betting low, the highest payouts come with the highest bets, and so Bison Rising is a high-risk game. 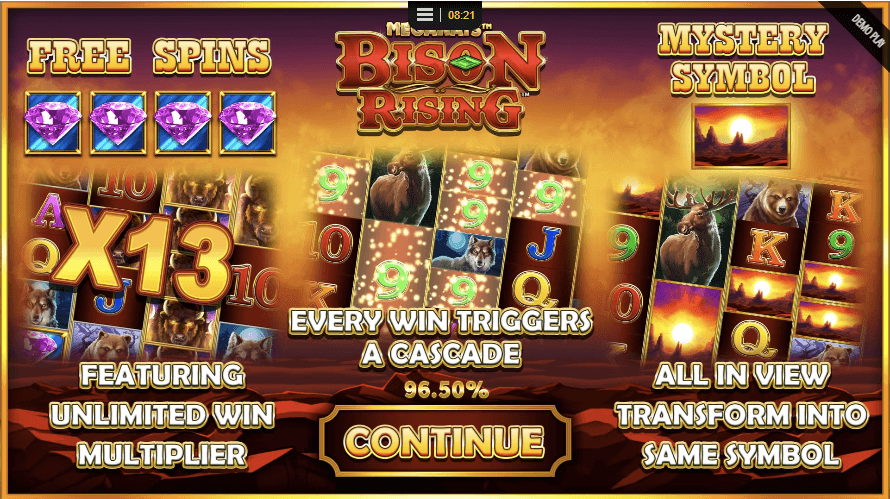 While this is not the game’s only feature, it is the most prominent feature in the base game and the one that will bring you the most wins. Landing several of the same symbols adjacent to each other on the reels from left to the right will trigger the cascade. During the cascade, new symbols will fall into empty spaces until no winning combinations are left.

The main symbols of Bison Rising are naturally a plethora of wild North American animals, with the Bison as the highest paying symbol. Then comes the bear, wolf, and moose. On the low-paying end, you’ll find a standard set of card symbols, A-9 in this case.

As far as special symbols are concerned, there is a Scatter in the shape of a purple diamond, the Wild, which is a golden bison, and the mystery symbol, which lands as a desert landscape and transforms into any other symbol except the Scatter.

The free spins bonus round is triggered when four or more of the Scatter symbols land on the six reels. Landing the correct amount of Scatters will take you to the Bonus Round Options. Here you will be presented with four choices.

Free spins can be retriggered during the bonus round if 3-4 Scatters land on the top reel. The multiplier feature will increase by +1 after each cascade.

The Player also has the option to buy the bonus round using “Bison Bet,” which instantly allows the player to pick one of the free spin choices mentioned above. 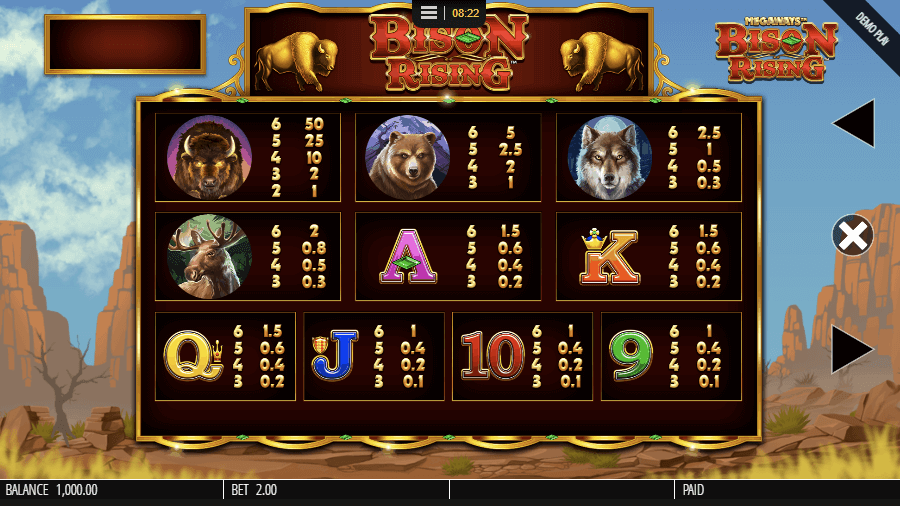 Bison Rising Megaways is an excellent game for players who enjoy the Western theme and wild animals. Since it is basically a remake of one of Blueprint Gaming’s previous games, there are not many new exciting features. Despite that, it is a fun slot providing what most of us want, a fun theme and good to excellent, wild wins.