You’ve heard the tale of the three little pigs, right? The ones who built three different houses to try and keep the Big Bad Wolf at bay. And, of course, he huffed and puffed and blew down the first two of these. One was made of straw, another of wood and the third of bricks. And naturally, he couldn’t blow down the third house. That’s basically the whole story, and it comes to life in this Quickspin offering known as Big Bad Wolf. In it, you’ll see some very impressive graphics, which is something that Quickspin is known for. And furthermore, there’s some intriguing gameplay for you to play through too. The three pigs appear as icons in the game, as does the wolf himself too. Plus, there’s a beehive which works as a wild icon. Therefore, you stand greater opportunities of creating winning combination with this one in play. All in all, the slot provides a very welcoming option to access, especially from a first impression point of view. But, we want to know more about its extra inbuilt features. 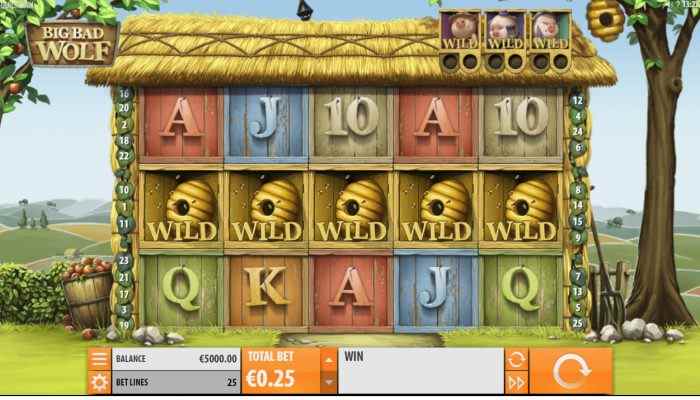 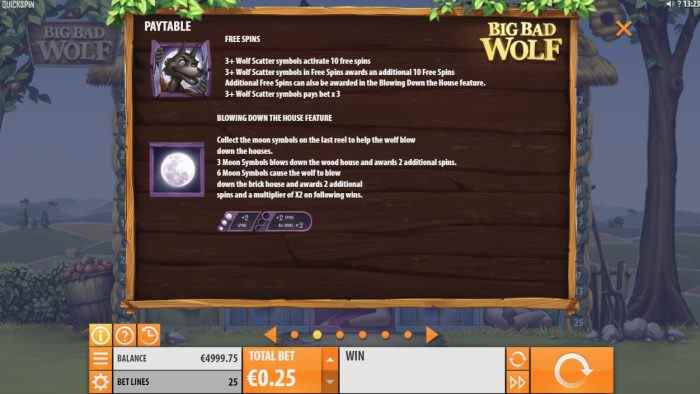 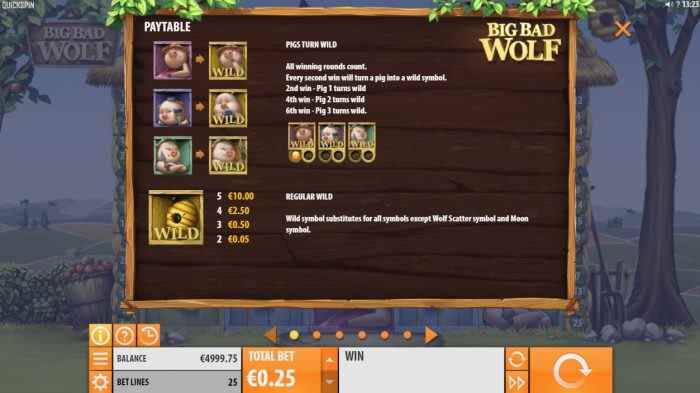 The re-telling of this classic tale is absolutely perfect in this Quickspin game. And it’s all backed up by the game containing some intriguing special features as well. The wild icon comes in the shape of the bee hive, and as a wild, it will stand in for any other symbol upon the reels. The only exceptions to this rule are the Multiplier Wild, the Free Spin scatter and the Free Spin progress scatter. And five of the wild icon appearing on a win line will ensure that you Big Bad Wolf also contains a freespins round for you to activate. And it’s the wolf icon that works as the catalyst for this. It’s the first scatter icon in the game, and this means that it can show up anywhere on the reels. Three or more of them coming into view will provide you with a total of 10 freespins altogether. And during the freespins round, three more of the scatter showing up will add an additional 10 freespins on top. Furthermore, three or more scatter icons also pay-out a triple multiplier to your line bet. However, it’s not the only triggering feature in this game.

You’ll see that the reels have a drop function to them, rather than a spin function. And whenever you create a winning combination, the icons participating in it will disappear from the reels. This is known as the Swooping Reels feature. It creates spaces for new icons to fall from the top of the screen and potentially form new wins. Every second consecutive win will turn one of the three pig icons into a wild. Therefore, if you get six consecutive wins, all three pigs will work as wilds for as long as you continue creating winning combinations!

Finally, there’s also a Blowing Down the House feature in the game too. To trigger this, you need to collect the moon icons every time they appear during freespins. Three of the moon icons appearing will blow down the wooden house and award two more spins to you. Then, if you collect six moon symbols, you will see the wolf blow down the brick house. This again will provide you with two more freespins. Plus, a double multiplier applies itself on all following wins after this.